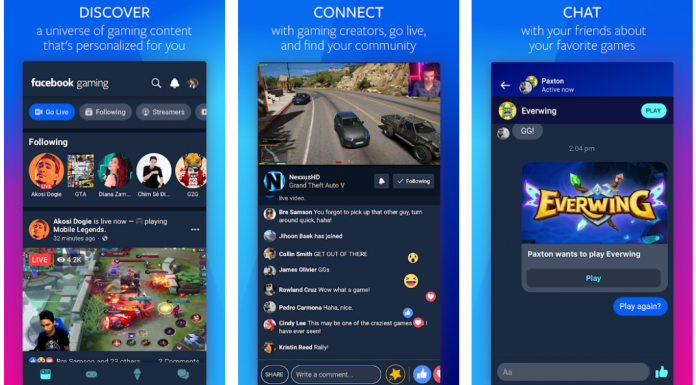 Facebook on Monday launched its own standalone free gaming app for Android devices globally to compete against the likes of Amazon-owned Twitch, Google’s YouTube and Microsoft’s Mixer. The social media giant confirmed that an iOS version is “in the works.”

The app has been released two months prior to its scheduled unveiling (i.e. June) due to a rise in the number of users gaming and streaming at home due to the current coronavirus (COVID-19) pandemic. Facebook said it has accelerated the launch “to encourage meaningful community interactions” and benefit people locked down at home.

“The Facebook Gaming app is a focused, gaming-only experience where you can watch your favorite streamers, play instant games and take part in gaming groups,” Facebook said in a statement on Twitter. “It’s all of Facebook Gaming in one neat, app-sized package.”

The Facebook Gaming app will allow millions of users to not only watch streams but also share live gameplay and show off their skills. The app introduces a new “Go Live” feature that allows users to upload streams of other mobile games on the same device. Facebook will also offer monetization under the “Level Up” option.

The app will also let you play Facebook games like Words with Friends, Trivia Crack, and Uno and see Facebook posts from game companies and news sites. It will also allow users to access gaming communities and groups. The app also has a built-in chat functionality.

“Investing in gaming, in general, has become a priority for us because we see gaming as a form of entertainment that really connects people. It’s entertainment that’s not just a form of passive consumption but entertainment that is interactive and brings people together,” Fidji Simo, Head of the Facebook Gaming app, was quoted as saying in an earlier New York Times report.

For the past 18 months, the company has been testing versions of the app in Latin America and Southeast Asia. More than 700 millions of Facebook’s daily users are engaged in playing games, watching gaming videos or posting in gaming groups.

Ever since its launch on the Google Play Store on April 20, the Facebook Gaming app has been downloaded more than 50 million times. The company plans to release an iOS version of the app once it receives approval from Apple.