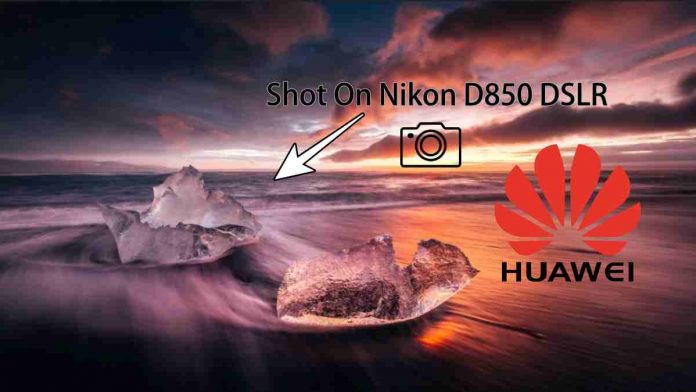 Huawei has issued an apology on Weibo after being caught red-handed for using photos shot on a DSLR to promote its smartphone photography contest (via Apple Insider). The photographs were supposed to feature on Huawei’s Next-Image community.

The Chinese smartphone maker recently promoted a smartphone photography contest on the Weibo platform with a collage video featuring impressive pictures “taken with Huawei smartphones.” However, some of the featured photos were taken from a DSLR camera and not from a Huawei smartphone.

The issue was first discovered by Weibo user Jamie-hua, aka Huapeng Zhao, who won a second-place in the 2018 iPhone Photography awards. He noticed that the fake photos were shot using a $3,000 Nikon D850 DSLR camera. The photos used in the video can be found in the online photography sharing platform, 500px attributed to photographer Su Tie.

Huawei quickly apologized for its mistake saying that the photos were “wrongly marked” in the promo video as “taken by Huawei phones” due to “an oversight by the editor.” The company said that the photos were meant to encourage consumers to share their shots on its online gallery.

It also thanked the Weibo user for pointing out the discrepancy and has since updated the original collage video by removing the line that says the photos were taken with Huawei phones. However, the line stating they were drawn from Huawei’s Next-Image community is still there. Huawei has also clarified that their content allows contestants to upload images taken by any device, including cameras.

“In a recently uploaded Huawei NEXT-IMAGE promotional video, we showcased 30 pieces of work by various professional photographers to encourage users to share their own work on their social media channels. We’ve erroneously labelled one of the featured pieces as one that had been shot on a Huawei smartphone. We have since removed that image from the video. We apologise for this regrettable mistake and will improve our editorial process to prevent a similar incident from occurring in the future,” Huawei said in a statement to Phone Arena.

This is not the first time that Huawei has been caught red-handed for promoting the photography capabilities of their smartphones. In 2016, Huawei confessed to using a photo shot on a Canon EOS 5D Mark III to promote its P9 phone.

Further, in 2018, Huawei used a photo shot by a DSLR to promote it as a selfie taken from a Nova 3 phone. Last year again, the company used DSLR photos to show off the camera capabilities of the Huawei P30 series.