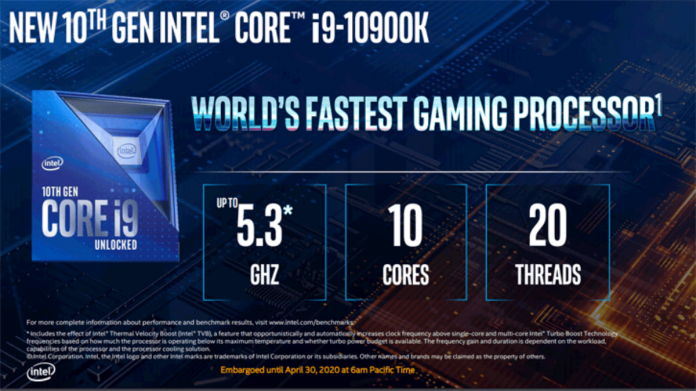 Intel also introduces Turbo Boost Max 3.0 and Thermal Velocity Boost (TVB) technology with the new 10th-gen, but they are limited only to the Core-i9 and Core-i7 CPU options.

According to Intel, its flagship Intel Core i9-10900K is the “world’s fastest gaming processor” with 10 cores and 20 threads and offers speed with a base clock of 3.8 GHz and single-core turbo speeds of up to 5.3GHz under TVB (Thermal Velocity Boost) technology making it the highest clocked stock processor in the market. It is also equipped with a TDP of 125 watts but has a turbo power recommendation of 250W.

In its release, Intel states that the i9-10900K allows the following:

The Core i9 and i7 chips all support dual-channel DDR4-2933 RAM except Celeron and Gold processors which support up to DDR4 2666 RAM.

Certain models like the Core i9-10900 comes with a K in the suffix which means they are unlocked, while the ones with an F as a suffix means it has no (active) integrated GPU and has a lower price tag. All processors will have Intel UHD Graphics 630 except the F variants and will support 40 PCIe 3.0 lanes from the platform.

The Pentiums and Celerons are all dual-core parts. While the Pentium chips are hyper-threaded (2-core, 4-threads), the Celerons (2-cores, 2-threads) do not have that feature.

In addition, Intel is also offering Hyper-Threading technology across the 10th generation Core i9 to Core i3 processors. The new Intel processors come with enhanced core and memory overclocking and support for Intel Ethernet Connection I225 as well as Intel Wi-Fi 6 AX201 Gig+ for better connectivity and support up to 40 platform PCIe lanes.