Sadly, similar to the previous updates of 2020, even this update is plagued with two serious issues.

In this article, we have shared the security fixes offered by the Windows 10 KB4556799 update accompanied by the problems that it causes.

Lastly, we have also shared several fixes to overcome the issues from KB4556799 Update.

These are some of the security fixes offered by the May 2020 Windows 10 cumulative update.

The May 2020 Windows 10 update is causing audio issues and temporary data loss for some users. A user reported that this update resets all of their audio driver configurations and even removes Realtek audio driver. Another common issue reported by users is that their audio devices don’t pass sound after installing the update.

A user reported to Windows Latest, that

“With this update, my audio devices have been completely broken. I have Realtek audio drivers and I can’t play anything via the speaker and even the headphones. I’m experiencing the problem on my desktop and Surface Pro 6. I clicked on the Sound icon and initiated Troubleshooting, which said that audio enhancements couldn’t be loaded. I uninstalled the update and audio is now back,”

As mentioned above, the sound issues caused by the latest Windows 10 update are 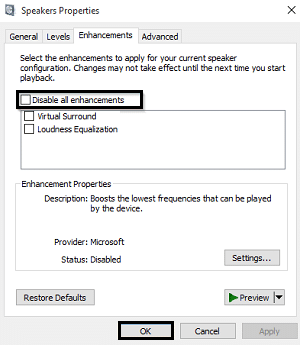 In order to fix these issues, you can Disable Audio Enhancements. To do so, go to sound options in the control panel. Select Realtek speakers. Go to properties then go to advanced, deselect Sound Enhancements. If your problem isn’t fixed yet then try out the next solution.

Uninstalling the KB4556799 update is one of the most effective ways to fix the problems caused by this update. You can follow these simple steps to uninstall the update.

Lastly, in order to fix the sound issues you can check out the official sound problem fixes shared by Microsoft.

Our team has also written an article on How To Fix No Audio Output Device Is Installed In Windows 10.

Do share the solutions if you find any in the comments section and help the Techworm community.