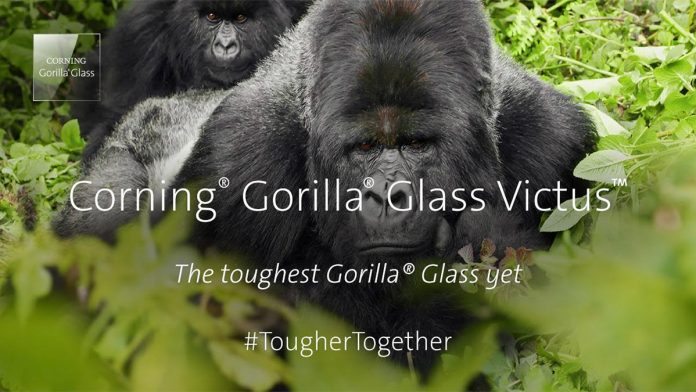 Everyone in the mobile tech space was waiting for the seventh generation of Gorilla Glass series, but Corning had other plans in mind.

Corning has announced the Corning Gorilla Victus, a next-generation aluminosilicate based glass for a variety of devices.

The company claims that the new Victus can shrug-off fall(face-first) on a hard surface such as concrete from a height of 6.5 ft(2 meters).

We leave non-corning glasses of the equation as the shatter from 0.8m, as claimed by the company.

According to Corning, Victus can survive upto 20 one-meter falls on an average while the Gorilla Glass 6 survives typically about 15 falls from one-meter on a dynamic median figure.

In a Knoop hardness test, conducted by the folks at GSMarena, the new Victus glass suffered only minor scratches when applied with 8 Newtons of the load as compared to Gorilla 6 which shattered on nearly half the load.

Samsung is the first to publicly announce their plans to be the first manufacturer to take advantage of the advancement in glass technology.

They will most likely be the first to ship phones with the Victus, while other companies have kept their plans under wraps for now.

Industry experts and the consequent chatter in the space has not discounted Apple’s ability to surprise with the new glass. It wouldn’t come off as big news, after Apple invested over $450 million in Corning since 2017, from their Advanced Manufacturing fund, following the newly formed partnership with Corning.