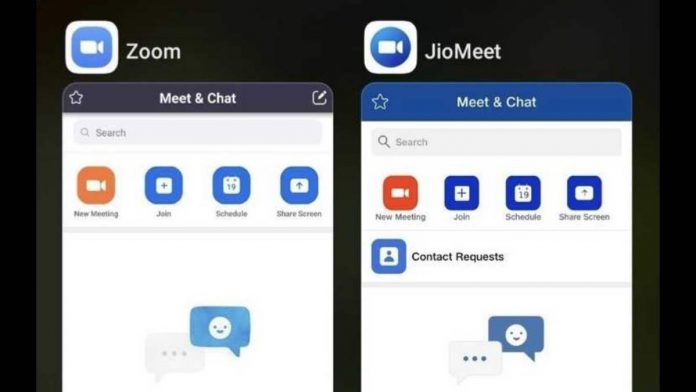 Zoom, one of the most downloaded and popular video conferencing app, is considering pursuing legal action against JioMeet.

For those unaware, Reliance Jio had launched its own video calling app, JioMeet last week to take on competitors like Zoom, Microsoft Teams, Google Meet, Skype and more. However, ever since its launch, people who downloaded JioMeet have noticed an uncanny resemblance to the Zoom app in terms of icons, features, user interface (UI), and app design.

Sameer Raje, India Head Zoom Communications, said that he was “shocked” at the striking similarity between the two apps, a report by Economic Times was quoted as saying.

“What our competitors do is their strategy… In my all-hands meet, I told my team, it doesn’t matter how an individual or a corporate reacts to what the competition is doing,” he added.

When questioned regarding the probability of a lawsuit against JioMeet, Raje said there have been a “lot of discussions internally. I would not like to comment on this because it is a matter for my legal team to look into it. I will leave it to them.”

Highlighting the similarities between Zoom and the JioMeet app, Raje said, “We knew it was coming. It’s fine, it is not the first time Zoom has faced competition. Our strength has been our products and technology, and our focus is on customers. What our competitors do is their strategy.”

Raje also said that Zoom’s team was in touch with the Ministry of Electronics and Information Technology (MeitY) and the Ministry of Home Affairs. He confirmed that technical information about Zoom’s data centres was under discussion. “We are not sharing data, we are sharing technicalities of our platform, how it operates,” he said.

Zoom is trying to clear the confusion among Indian users that it is not of Chinese origin and that the data is not shared with neighbouring countries. Over the past three months, Zoom has been in touch with the Indian government on how it operates its platform and does not store data outside the country.

“It is not a question of being worried, but it is a question of putting the truth out there because we believe there is a lot of misinformation. People feel Zoom is of Chinese origin and we share data with the neighbouring country, etc. We are an American company and we do not share data with any government. We have two data centres in India; people tend to forget that,” said Raje.

In a statement posted on Twitter last week, the company had clarified that Zoom is a U.S. company, publicly traded on the NASDAQ, founded and headquartered in San Jose, California.

"We do recognize that as we continue to introduce ourselves to the Indian market, there has been some confusion about the facts as it relates to Zoom. Zoom is a U.S. company, publicly traded on the NASDAQ, founded and headquartered in San Jose, California."

Last month, the Government of India had announced a ban on 59 Chinese mobile applications, which included TikTok, UC Browser, CamScanner, SHAREit, WeChat, and more, citing these apps “are engaged in activities which is prejudicial to sovereignty and integrity of India, defence of India, security of state and public order”.

The ban was implemented in the wake of the India-China border conflict that took place last month, leading to anti-China sentiment brewing among people with many independent activists calling for the boycott of Chinese goods, services and apps.

Several homegrown apps have jumped into the market following the ban of Chinese apps in India and noticed skyrocketing downloads as support for Indian-origin apps. For instance, JioMeet recorded 1 million downloads within a week of its launch.