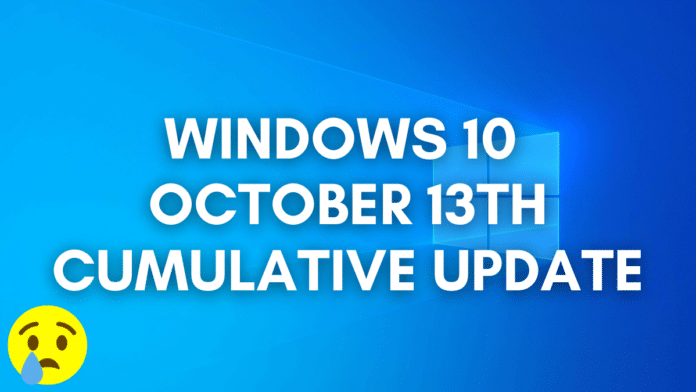 Once again Microsoft has released a disastrous cumulative update that is causing some serious problems. Similar to every other update in the past this update was supposed to fix several vulnerabilities and bugs. However, it ended up causing unwanted problems.

Here’s a list of cumulative updates released on October 13th

In this article, we have discussed some common issues that users are facing and the problems are accompanied by some easy fixes.

According to several Redditors, the problems with the October 13th Cumulative updates start arriving the moment you press the restart button to install the update.

With this update, users are stuck at the restart screen or at a certain percentage for several minutes or in some cases even an hour or two or even end up in crashing or BSOD.

Well, if you stuck in the endless installation loop then we would advise you to wait for at least an hour. Unfortunately, some users are also getting error messages while trying to install the updates. Moreover, the update is also causing blue and black death screens.

System crashes, unresponsive file explorer, printing problems, and audio issues are some of the troubles that the update is causing post-installation. Luckily, the aforementioned issues are not wide-spread and only some users are facing them.

As reported by Windows Latest, this time around trying to re-download the update doesn’t work this time.

As of now, Microsoft hasn’t shared any word about the problems associated with this update. If you haven’t installed the update yet then we would advise you to pause the update for quite some time.

However, If you did install it you can uninstall it to enjoy a more stable version of Windows 10.

We have shared a few videos that might help you to fix the problems with this update.