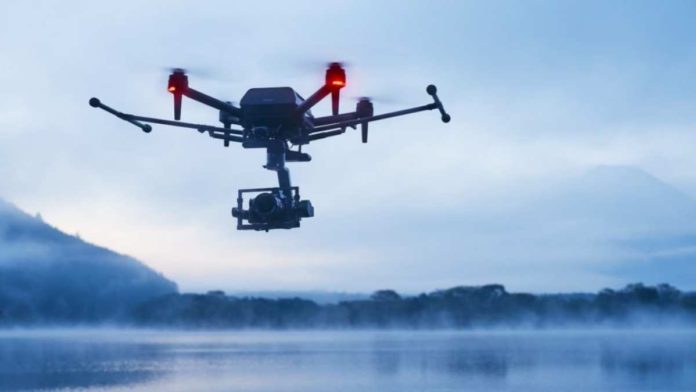 Japanese giant Sony Electronics on Thursday officially launched the new professional drone that it had teased during the CES 2021 in January this year.

Called the “Airpeak S1″, this is Sony’s first commercial drone aimed at professional filmmakers and creatives and also their official entry into the drone market.

The Airpeak S1 is the world’s smallest drone designed to carry a gimbal along with a full-frame mirrorless interchangeable-lens camera.

The drone utilizes a proprietary motor, propeller, control system, and sensing technology, enabling dynamic and precise flight with high agility and supporting the creative expression of its users to the fullest.

“Combining an extremely compact size with some of Sony’s most advanced imaging, sensing, AI and robotics technologies, the S1 will allow content creators, storytellers and commercial professionals to capture that which they’ve never been able to capture before.”

The drone can hit a top speed of 55 mph in just 3.5 seconds, which according to Sony, is faster than any comparably priced drone from DJI.

With a full charge, the Airpeak S1 offers flight time up to 22 minutes without a payload and about 12 minutes of flying duration when equipped with an Alpha 7S Mark III and a 24mm f/1.4 lens.

Further, propulsion technology using a combination of Sony developed key devices provides wind resistance up to 20m/s, enabling stable flight even in strong winds. It is equipped with an ESC (Electric Speed Controller) for optimal control.

The drone features a unique, high-performance flight control system that integrates the propulsion device and all sensor information to ensure a stable flight and high maneuverability.

Furthermore, stereo cameras equipped with Sony’s image sensors located on the front, back, left, right, bottom of the aircraft help it constantly to optimize its performance, along with an infrared range-finder that actively helps it avoid obstacles.

Sony says its “Vision Sensing Processor” processes camera data at high speed, and proprietary algorithms are used to accurately estimate the aircraft’s spatial position and orientation in real-time, enabling stable flight even in environments where GNSS (Global Navigation Satellite System) reception may be affected or hindered, such as indoors or under bridges.

The drone and gimbal will be supported by a standalone controller as well as “Airpeak Flight” app, an iOS and iPadOS only application. This iOS / iPadOS compatible mobile app integrates the aircraft, remote controller, camera, and gimbal, allowing the operator to monitor status information such as flight distance and remaining battery power, and change various operations and settings on the screen.

In addition, a web application called “Airpeak Base” is also available, which allows the operator to manage equipment, create flight plans, manage flight logs as well as automatically fly the aircraft along the same course many times.

The Airpeak S1 will come with a dual operation mode so that one person can maneuver the drone while another operates the camera and gimbal independently.

The drone can work seamlessly with a 3-axis gimbal and several Sony’s cameras, including the A1, A911, A7s111, A7RIV, and FX3 cameras, along with E-Mount lenses between 14mm and 85mm. Sony’s Alpha 1, which is capable of shooting 8K video, is also available as an option.

The Airpeak S1 is available for pre-order and will start shipping in September 2021 for $9,000. It will include two sets of propellers, a remote controller, two batteries, and a battery charger. The gimbal made specifically for the Airpeak S1 by a third party will be sold separately.

Check out the video below that displays how the Airpeak S1 holds up against strong winds.

Also, check out the drone’s retractable landing gear in action.