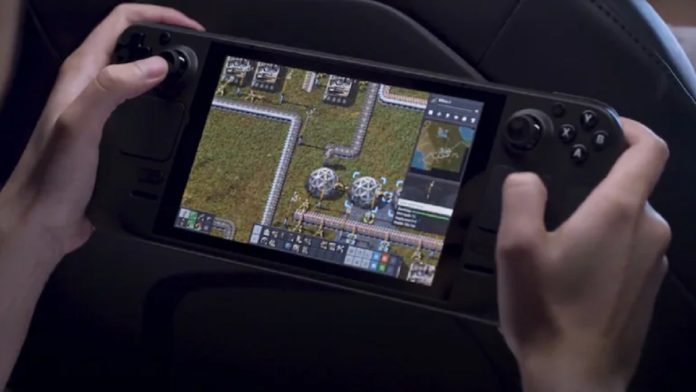 It is powered by a custom AMD APU, which according to Valve, is optimized for handheld gaming. It sports a Zen 2-based CPU (4-cores and 8-threads) + RDNA 2 GPU (8 compute units), which delivers more than enough performance to run the latest AAA games.

Learn more at https://t.co/ZOTx3KUCVK and reserve yours tomorrow. #SteamDeck pic.twitter.com/jcgbaKfT9c

The device comes with standard 16GB LPDDR5 RAM, but has three storage options such as 64GB eMMC, 256GB NVMe SSD, and 512GB NVMe SSD. All these three variations of Steam Deck include a high-speed microSD card slot for storage expansion.

Coming to gamepad controls, the device includes items such as four array of controller buttons like A B X Y, D-pad, two analog triggers, two bumper buttons, View & Menu buttons, four assignable grip buttons on the lower back part of the device, and two full-size analog sticks with capacitive touch.

Steam Deck’s stereo speakers come with embedded DSP that provides clarity and a wide soundstage for an immersive listening experience. Its onboard 40 watt-hour battery provides several hours of playtime for most games.

In lighter use cases like game streaming, smaller 2D games, or web browsing, one can expect to get the maximum battery life of approximately 7-8 hours. It will also be accompanied by a 45W USB Type-C PD3.0 power supply.

Steam Deck measures 298mm x 117mm x 49mm and weighs approximately 669 grams. It comes pre-installed with SteamOS 3.0 (Arch-based) together with KDE Plasma as its desktop UI, which allows the users to utilize the Steam Deck as a Linux-based PC.

Further, features such as Store, Steam Chat, Remote Play, Community, cloud saves, and pop-up notifications are all included in Stream Deck. The device can be used with virtually any USB-C hub.

With the right cables, Deck can be plugged into the TV, monitor, or even old CRT. When docked, the Steam Deck’s USB-C port can carry video, audio, input, etc.

The company is working on an official dock for Steam Deck, which will be sold separately and include DisplayPort 1.4, USB-A 3.1 Port, 2 USB-A 2.0 Ports, Ethernet, and HDMI 2.0 port.

In terms of pricing, the Steam Deck starts at $399 for a base 64GB model and a carrying case. Further, the 256GB model along with an “exclusive Steam Community profile bundle” costs $529. Lastly, the $649 model has 512GB of storage, an anti-glare etched case, a community bundle, and an “exclusive virtual keyboard theme.”

Steam Deck will start shipping from December 2021 to the U.S., Canada, European Union, and the U.K. with more regions coming in 2022.