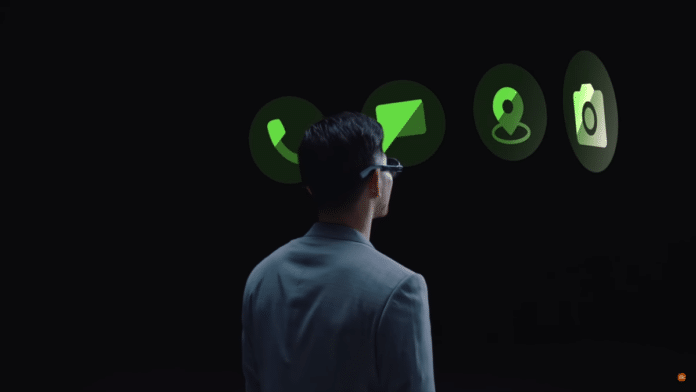 It is able to display messages and notifications, make calls, navigate, capture photos, and translate text right before your eyes.

The company is adopting MicroLED imaging technology in the device to lower the design space needed in structural design, as well as the overall weight of the device.

Also, MicroLEDs have emissive property that allows for brighter displays and deeper blacks.

They have a higher pixel density and longer lifespan while having a simpler structure, which allows for a more compact display, as well as easier screen integration.

Further, Xiaomi has opted for an ultra-efficient monochrome display solution, which is capable of reaching a peak brightness of 2 million nits.

This allows sufficient light to pass through complicated optical structures before reaching the eye even in harsh direct sunlight.

“The grating structure etched onto the inner surface of the lens allows light to be refracted in a unique way, directing it safely into the human eye. The refraction process involves bouncing light beams countless times, allowing the human eye to see a complete image, and greatly increasing usability while wearing. All this is done inside a single lens, instead of using complicated multiples lens systems, mirrors, or half mirrors as some other products do,” Xiaomi said in its blog post.

In addition, by adopting optical waveguide technology which refracts lights at 180°, the MicroLED display accurately transmits light beams to the human eye through the microscopic grating structure of the optical waveguide lens.

The glasses have a 5MP camera on the front, which can take photos and translate text into photos.

Xiaomi Smart Glasses also utilizes the built-in microphone and proprietary translating algorithm, which is capable of transcribing audio into text with translations in real-time. The indicator light next to the camera will illuminate when the camera is in use to indicate that photos are being taken.

It also comes with Xiaomi’s XiaoAI assistant as a primary interaction method. It selects and pushes the most important messages from the phone and mirrors them on the display.

The Assistant also shows the incoming caller’s contact number, helps in navigation by presenting roads and maps in front of you in real-time, etc.

Xiaomi Smart Glasses is powered by a quad-core ARM processor and has a battery, touchpad, Wi-Fi/Bluetooth modules, Android operating system, and more.

No information regarding the pricing or availability of the Smart Glasses has been revealed yet. Keep watching this space for more updates!