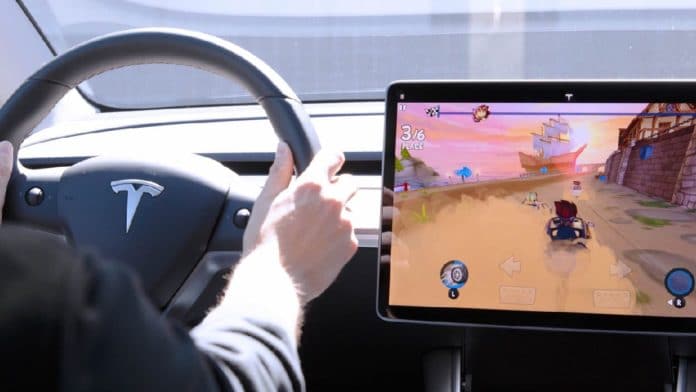 Tesla on Thursday agreed to release a software update that will stop video games from being played on the electric car’s entertainment system while in motion.

For those unaware, last year, the electric carmaker had added a “Passenger Play” feature on its electric vehicles that allowed car drivers to play video games available on the center touchscreen only when it was parked.

However, Tesla later released a software update that allowed occupants to play video games while driving after a warning that it should only be used by passengers. This change made by the automaker raised a lot of questions about safety and driver distraction.

As a result, the U.S. National Highway Traffic Safety Administration (NHTSA) on Wednesday announced that it has opened a preliminary evaluation into the Passenger Play feature that is visible from the driver’s seat and can be enabled while driving the vehicle.

According to the agency, they want to assess the driver distraction potential while the vehicle is being driven, as the feature may distract the driver and increase the risk of a crash.

NHTSA said it has “confirmed that this capability has been available since December 2020 in Tesla ‘Passenger Play’-equipped vehicles.”

UPDATE: A day after NHTSA announced its investigation, Tesla has agreed to prevent drivers from playing video games while the car is in motion.

Note that Tesla introduced this feature a year ago. NHTSA took action only after NY Times ran a story on it.https://t.co/d6GjnwEGcW

Following the opening of a preliminary evaluation of Tesla’s ‘Passenger Play,’ Tesla informed the agency that it will soon send out an Over-The-Air (OTA) update that will lock the Passenger Play feature and not work while vehicles are in motion.

“The NHTSA constantly assesses how manufacturers identify and safeguard against distraction hazards that may arise due to faults, misuse, or intended use of convenience technologies, including infotainment screens,” the agency said. It added that it is “committed to ensuring the highest safety standards on the nation’s roadways.”

NHTSA’s investigation of the Passenger Play feature covers roughly 580,000 Tesla EVs (Model 3, S, X, and Y) produced between 2017 and 2022 and will continue even with the update.

This is not the first time that NHTSA has opened a safety investigation. In August this year, the agency started a probe into 765,000 Tesla vehicles over its Autopilot system after a series of crashes involving the system and parked emergency vehicles.