Google is adding another feature to its Microsoft Word-like Google Docs platform in an attempt to improve the quality of writing. Currently, Google Docs keeps a tab on suggestions, spelling errors, and grammar errors and points them out when it intercepts them.

With the latest update in place, Google Docs will be able to point out inappropriate words and sentences that might seem dumb. It will help users write clear and concise copies free of any grammatical errors.

Grammarly and a few other third-party platforms and extensions have long been providing services to rectify grammatical errors and whatnot over the past couple of years. Google too provides countless suggestions and nudges to grammatical errors, however, it still needs a third-party grammar-checking app to ensure the copies are error-free. 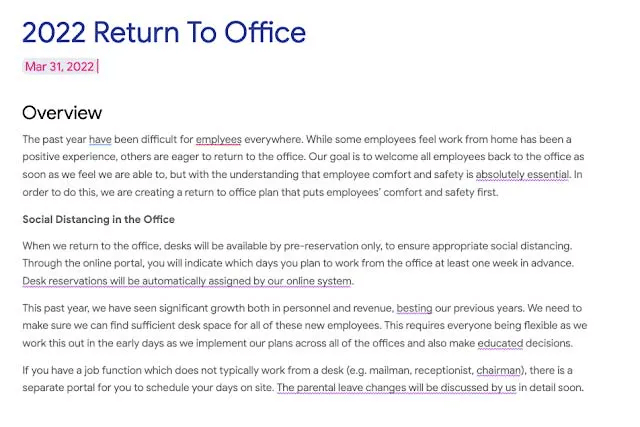 Cut to now, the feature announced by Google will mark sentences with a purple-colored line making it obvious that it is not accurate and requires a re-edit.

The rollout of these features is selective because that’s something Google has been doing for a lot of other Docs features for some time now. The pageless view for Google Docs was made available for selected plans similar to Markdown support.

In any case, the two grammatical assistive writing features will start arriving sometime in the next couple of weeks and are expected to reach users by the second half of April 2022. The admins and end users can turn off the features if needed much like any of the sub-features under ‘Spelling and Grammar’.