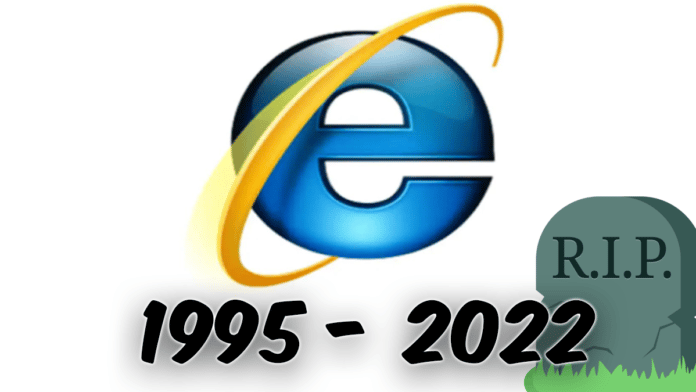 Microsoft is finally drawing curtains on Internet Explorer, one of its most popular search engine browsers, after being in service for twenty-seven (27) years. The web browser is officially set to retire on June 15, 2022.

Released in 1995, Internet Explorer was announced first as part of the add-on package for Windows 95 that year.

It was, however, later provided as free downloads, or in-service packs, and included in the original equipment manufacturer (OEM) service releases of Windows 95 and later versions of Windows.

However, new feature development for the browser was discontinued in 2016 in favor of the new web browser, Microsoft Edge.

The company also encouraged its customers to move to Microsoft Edge, the successor of IE, which provides support for legacy and modern websites and apps.

It added that organizations, which are dependent on legacy Internet Explorer-based sites and apps, will be able to access them through a special IE Mode from Microsoft Edge.

“With Microsoft Edge capable of assuming this responsibility and more, the Internet Explorer 11 desktop application will be retired and go out of support on June 15, 2022, for certain versions of Windows 10.”

Internet Explorer was once the most widely used web browser, attaining a peak of about 95% usage share by 2003.

However, its usage share began to decline with the launch of its competitors like Firefox (2004) and Google Chrome (2008), and with the growing popularity of mobile operating systems such as Android and iOS that do not support Internet Explorer.

Netizens took to Twitter to bid adieu to the aging browser in form of posts and memes, which are equally hilarious as well as nostalgic. Let’s have a look at some of them:

Say goodbye to the ever great Internet Explorer this June.?? pic.twitter.com/E5BMHcByiv

Internet Explorer is shutting down in three days. I haven't used IE in a decades but it was the browser I had used for the majority if my childhood.

Whether you loved or hated Internet Explorer, it'll be the end if an era ?

end of an error pic.twitter.com/5hdKBk1B5I