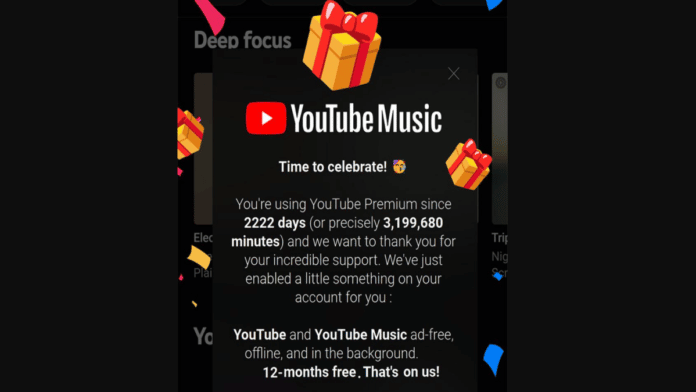 Google-owned YouTube, the popular online video-sharing platform, has decided to reward its YouTube Premium customers of more than six years, a year of free service, according to a report from 9to5Google.

This update was reported by a Redditor u/Mental-prison who received a “Time to celebrate” prompt in YouTube Music for Android.

The message read, “You’re using YouTube Premium since 2222 days (or precisely 3,199,680 minutes) and we want to thank you for your incredible support. We’ve just enabled a little something on your account for you: YouTube and YouTube Music ad-free, offline, and in the background. 12-months free. That’s on us!”

While Redditor u/Mental-prison was the only person to report this update in the community, a couple of Premium users have responded to him saying that they too should be able to know about the free service in a week or so, as they are nearing that mark.

Whether this free service is just a one-off case or would be made widely available to other YouTube Premium users, we shall get to know about it very soon.

YouTube Premium (formerly known as YouTube Red) costs $11.99 per month and allows users to watch an extensive collection of movies and TV series. Any sort of original content on YouTube can be accessed via YouTube Premium. It also offers ad-free and background playback, Music Premium, the early testing ability of some features as well as offline downloads for YouTube videos.

Going by the promotion and the concerns raised by users, it seems that the offer is currently applicable only on YouTube’s Premium service.