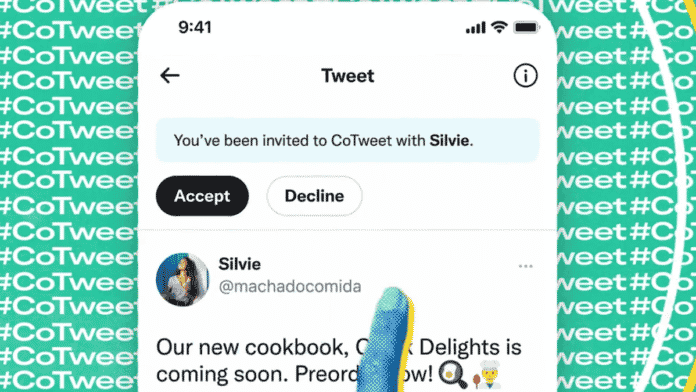 Twitter, the popular microblogging platform, has started rolling out a new experimental collaborative feature that allows two accounts to co-author a tweet.

The new feature dubbed “CoTweet” is a co-authored Tweet that is posted simultaneously to both authors’ profiles and their followers’ timelines, a feature similar to the “Collabs” feature introduced by Instagram last year.

One can identify the CoTweet feature when you see two authors’ profile pictures and usernames in the header. This feature help authors share the spotlight, unlock opportunities for engaging new audiences and enhance their established partnerships.

Now testing CoTweets, a new way to Tweet together. pic.twitter.com/q0gHSCXnhv

When the message is ready, an author creates the CoTweet and starts an invitation to the co-author. Twitter will display a message to the co-author saying: “You’ve been invited to share ownership of a Tweet. If you accept, a CoTweet will be published showing you both as co-authors. […] You can remove yourself anytime.”

In the event, the author does not want to be associated with whomever they had co-tweeted with, Twitter allows them to delete the tweet. Also, the platform allows the author to revoke ownership of the tweet once it has been published.

Currently, the new CoTweet feature is a limited-time experiment with “select” accounts in Canada, Korea, and the United States, which allows to send invites to CoTweet with another account.

“We continue to explore new ways for people to collaborate on Twitter,” said Twitter spokesperson Joseph J. Nuñez in a statement. “We are testing CoTweets for a limited time to learn how people and brands can use this feature to grow and reach new audiences and strengthen their collaborations with other accounts.”

However, the Twitter spokesperson did not specify if, or when, the feature may be available for a wider audience.

“At the end of this experiment, we may turn off this feature and any CoTweets that were created may be removed,” notes the social media company.

To know more about the new CoTweet feature, you can click the FAQ page here.

Last month, Twitter began testing out a new feature called “Notes” that will allow users to write and publish long-form tweets in a single tweet, which can include text up to 2,500 words.

The microblogging platform also started rolling out the “Twitter Circle” feature widely to more users. This feature is similar to Instagram’s Close Friend’ feature, which allows users to restrict their audience for their Insta stories.