Meta’s CEO Mark Zuckerberg showed that there is no love lost between Meta and Apple, as he took a dig at Apple’s iMessage in a new advertising campaign highlighting the rivalry once again between the two Silicon Valley tech giants.

Currently, the ad campaign is put up at Pennsylvania Station in New York City promoting WhatsApp over SMS or iMessage.

The ad also pokes fun at the green bubble / blue bubble divide. It shows three text bubbles: the first one in green, the next one in blue, and the third one in white. 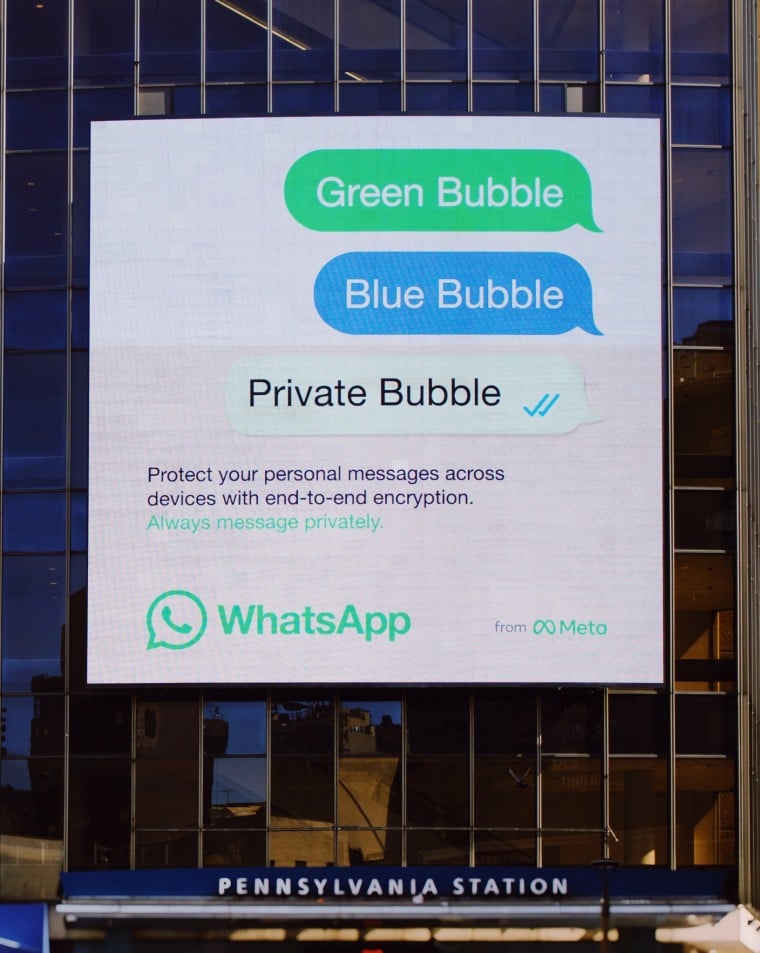 The third bubble in the ad has a light green color and two blue tick marks indicating that the WhatsApp message has been delivered and read.

The Meta CEO also shared the image of this ad on his Facebook and Instagram pages on Monday along with comments claiming that WhatsApp is far more better and safer to use than iMessage due to its end-to-end encryption.

Apparently, iMessage is very popular in the U.S., particularly among teenagers and college students.

“WhatsApp is far more private and secure than iMessage, with end-to-end encryption that works across both iPhones and Android, including group chats,” Zuckerberg wrote in a message.

He also pointed out that WhatsApp has the capability for all new chats to disappear with the tap of a button. It also comes with “end-to-end encrypted backups too” that work across iPhones and Android, which is not supported in Apple’s popular iMessage service.

Will Cathcart, head of WhatsApp at Meta, too explains the importance of end-to-end encryption to people in the U.S. in a tweet thread of his own. He also mentions the growing number of WhatsApp users in the U.S., which he wants to continue and increase even more.

WhatsApp’s recent ad campaign brings out the tension that is swelling between the two tech giants for some time now. It all started with the introduction of Apple’s ‘App Tracking Transparency’ (ATT) feature in iOS 14.5 in April 2021, which requires apps to get users’ permission before sharing their activity and data with websites and apps owned by other companies.

The ATT feature gives iPhone users a little more control over whether or not they want an app to be able to track them. In other words, it allows them to avoid apps or websites from tracking their online activity for advertising purposes.

Meta has accused Apple that this privacy change is affecting small businesses and its ads businesses, which in turn is hampering its revenue model.

On the other hand, Apple has always been very vocal that its products are more private and more secure than its rivals, as they are designed with the user’s interest in mind and their safety as well as their online privacy.

It will be interesting to see whether or not the Meta ad campaign will work in favor of the Silicon Valley giant.