A new XSS (cross site script) vulnerabilty was found in the Facebook login page by Mauritania hacker (Anonghost team) today, this vulnerabilty lets the attacker to add desired message into the login page. the XSS was working till the time this article was posted. although Facebook will correct it soon. 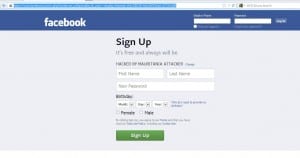 What is XSS?
Cross-site scripting (XSS) is a type of computer security vulnerability typically found in Web applications. XSS enables attackers to inject client-side script into Web pages viewed by other users. A cross-site scripting vulnerability may be used by attackers to bypass access controls such as the same origin policy. Cross-site scripting carried out on websites accounted for roughly 84% of all security vulnerabilities documented by Symantec as of 2007.Their effect may range from a petty nuisance to a significant security risk, depending on the sensitivity of the data handled by the vulnerable site and the nature of any security mitigation implemented by the site’s owner. (source:wiki).

Here is the link of XSS-https://www.facebook.com/r.php?locale=en_us&possible_fb_user=+display=&email=HACKED%20BY%20MAURITANIA%20ATTACKER