TechWorm
Home Apple
Facebook
Twitter
Pinterest
WhatsApp
Apple’s CEO Tim Cook sent a year-end MEMO to all its employees stating Apple is Working for some Big Stuff in the upcoming year.
9to5Mac were the first to get hands over this MEMO.The major part of the MEMO recapped the year 2013 and ended with a TEASER where Cook mentions of the new Products.

“We have a lot to look forward to in 2014, including some big plans that we think customers are going to love. I am extremely proud to stand alongside you as we put innovation to work serving humankind’s deepest values and highest aspirations. I consider myself the luckiest person in the world for the opportunity to work at this amazing company with all of you.”- Tim Cook says.

The Big Question is What Does the CEO talks of ?

There are hand full of rumours building up already. Special mentions of the i-watch,wrist computer.There were news Earlier that Apple have been working on this device with a bunch of key hires that added to the bit.One of the hires were Paul Deneva,the former CEO of fashion company Yves Saint Laurent who is said to have been working on these ‘special projects’ which includes the i-Watch. 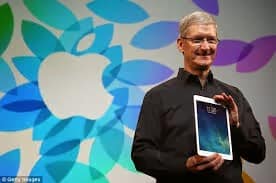 Then we have the New iPhone.Expectation are there that apple would come up with a whole new look for its customers.possibilities of a larger screen are not bleak.
Rumours of Apple trying to expand its television products also can be heard of.Lastly we have the most awaited iPad Pro(named as of now) , a hybrid device, that is part laptop and part tablet, sort of like Microsoft’s Surface,which is supposed to have a larger display.There are many more Rumours but shear evidences are available of the new iPad.