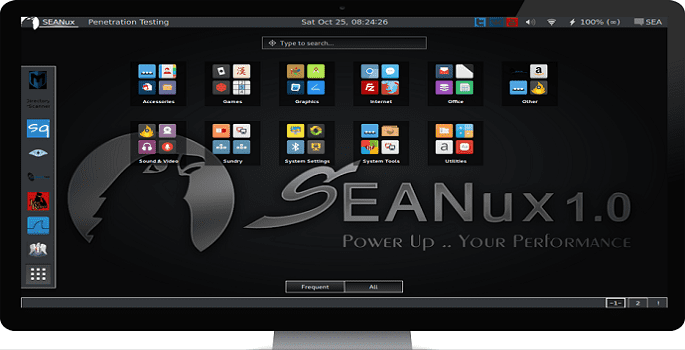 Syrian electronic Army- the pro Assad regime backers and hackers and one of the most effective hacker groups,  have released their own linux distrubution named as SEANux. The Syrian Electronic Atmy developed SEAnux is open source and available publically to all who are interested.

What is a Linux Distribution?

A Linux distribution is an operating system made as a collection of software based around the Linux kernel and often around a package management system. Most distributions come ready to use and pre-compiled for a specific instruction set, while others  are distributed in source code form and compiled locally during installation.

Who is Syrian Electronic Army?

For the uninitiated, the Syrain Electronic Army has turned out to be one of the most effective hacker groups operating out of  Syria and are pro-Assad supporters. They mainly target anti Assad websites and western interests. SEA has been in countoversy for the ways of hacking used by them. Many security researchers believe that they use spear phisihing to achieve their hack attacks.  While many black hat hackers claim that SEA have access to several premium exploit tools  from the underground forums which they use on there victims. Whatever SEA uses has been very successful in achieving their hacking targets. SEA’s list of victims consists of social media accounts of a number of high-profile western  media groups  including The Guardian, The New York Times, The Washington Post, CNN,  Forbes, the Financial Times and the AP, Facebook & Twitter Account ofBarack  Obama, Twitter Account of Unicef, Facebook, Twitter,  Microsoft, eBay, PayPal VOIP apps like Viber and Tango and counting.

As SeaNux is released by one of the most notorious hackers groups, researchers and experts believes that the Operating System must have builtin backdoors and will come laden with malwares which can in turn help the SEA to turn that particular PC into a zombie botnet for furtherance of their hacking goals.

Team Techworm asked few of the Linux lovers from blackhat community they said why take a chance. ” How could we trust Syrian Electronic Army with there OS” said an Anonymous hacker from Russia.

While  another hacker said,” who will want there computers to work as a botnet for Syrian Electronic Army’s attack, who knows whats in there”

Techworm contacted SEA directly to investigate above claims by other hackers.  We asked Syrian Electronic Army what they have to say about these allegations.  One of the SEA memebers said, “For sure, there is no backdoors in the system, we are the kind of people who do care about their followers and fans.”

He also added that, “Anyways, it’s open source and you can check the code source by yourself.”

Why Release a OS?

When asked this question, the team member of SEA said that, “Since we are in a cyber war situation, and some of members are being targeted by authorities, we are releasing an easy to use/secure system with the capability to use penetration testing tools. And anyone who cares about his security, can use this system.”

Since SEANux is a open source and the code is available freely it looks like SEA dont have any malafide intentions behind releasing it, though Techworm wouldnt guarantee such a thing.

Anonymous-OS was released in 2012 by Anonymous affiliated hackers with much hype which was later found to contain several backdoors which allowed Anonymous ready zombie botnets.

SEANux v1.0 “Power Up Your Performance”

Whats so special about the  Syrian Electronic Army released the SEANux version 1.0?  SEANux is an Ubuntu-based Linux distribution with a modified Gnome Shell interface, icons and GTK Theme.

It is charged up with penetration testing tools and other useful applications for general purposes. Tools built up with the OS are handpicked by the Syrian Electronic Army’s team including varities of best tools to choose from, different browsers, multiple pentesting tools and other miscellaneous app to ease of your day to day works. In addition to the most popular Apps available with other linux distributions, SEANux also comes up with additional tools developed inhouse by the Syrian Electronic Army

SEANux 1.0 is currently available for both 32 and 64 bit systems. If you are planning to install this OS here is what are the system requirements to install it

-Use Free ISO Burner to burn the iso file to DVD/USB or Startup Disk Creator if you are already using Linux.

SEANux can be downloaded from the official website of SEA https://seanux.sea.sy/#download

Or incase the website of Syrian Electronic Army is blocked in your country, you can download the Os From yandex