Last Friday, Material Girl,  Madonna unexpectedly released of six songs on iTunes from her upcoming album “Rebel Heart” because somebody released the demo versions of some of the tracks.  The original plans for release of “Rebel Heart” were for Spring 2015 but the apparent hack has thrown a spanner into Madonna’s plans.

The Material Girl took to photo sharing site, Instagram to vent her anger against the thieves/hackers. 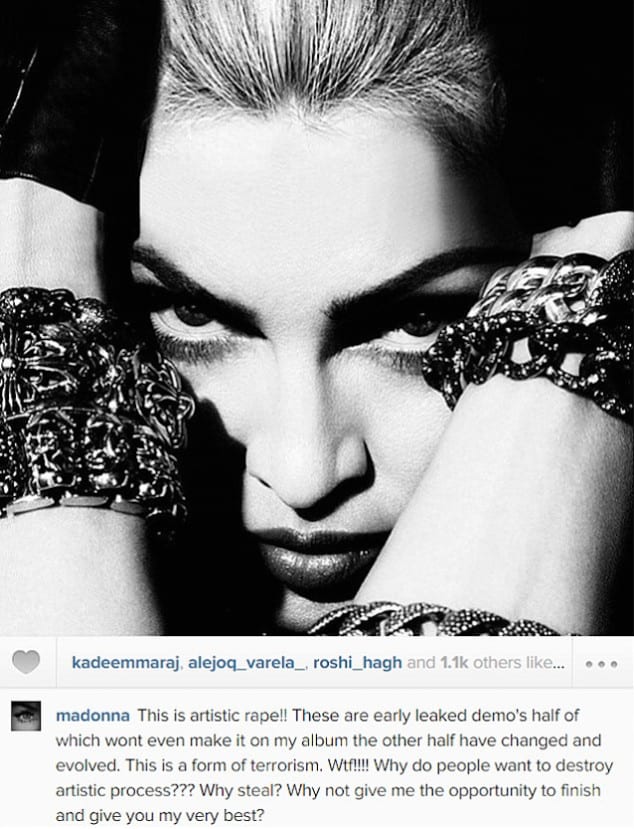 Madonna’s message on Instagram shows the kind of anger she has for the demo version leakers,

This is artistic rape!! These are early leaked demo’s half of which wont even make it on my album the other half have changed and evolved. This is a form of terrorism. Wtf!!!! Why do people want to destroy the artistic process??? Why steal? Why not give me the opportunity to finish and give you my very best?

How did Madonna’s unreleased demo recordings leak out?

In most of the cases like this, the leaks are a inside job but after the massive hack attack on Sony, Madonna suspects a hack attack.  Madonna gave an interview to  Guardian on Sunday just two days after the preponed release of the tracks. In the interview Madonna says, “she was “living in a state of terror” following the leak, adding that there was “a big possibility” they were the result of her personal computer being hacked.”

She added, “Obviously there is a person, or a group of people behind this that were essentially terrorising me. I don’t want to sound alarming, but certainly that’s how I felt. It’s one thing if someone comes into your house and steals a painting off your wall: that’s also a violation, but, your work, as an artist, that’s devastating.”

Madonna  has reasons to believe it was work of hackers because in addition to the demo versions, certain photographs taken for the promo of the album were also leaked. Madonna said that the some of the tracks were records many months ago.

“It wasn’t just music. Images were coming out that I’d never seen before. It was then I started to think ok, what’s happening? What is the source of the leak? It’s not just one person, or someone sitting next to me in an office, or someone in a recording studio. I’ve had leaks before, a couple of weeks before an album was released, a lot of other artists have too, we all have to deal with that. But to have songs in the earliest demo form, from last March, that’s extremely disturbing to me.”

“Obviously there is a person, or a group of people behind this that were essentially terrorising me. I don’t want to sound alarming, but certainly that’s how I felt. It’s one thing if someone comes into your house and steals a painting off your wall: that’s also a violation, but, your work, as an artist, that’s devastating.”

“I’m an artistic person, I’m very expressive. I’m sorry if words alarm people, but that’s what it felt like. It was not a consensual agreement. I did not say ‘hey, here’s my music, and it’s finished.’ It was theft.”

In the meantime her manager, Guy Oseary sought to take help of her fans via Twitter to find the culprits. Hope Madonna and her manager find the culprits real soon as the leaks and further preponement of albums may cause huge financial loss to her. The ‘Rebel Heart’ however seems to be doing pretty well.