The Newsweek Twitter account was hacked at 10:45 a.m and remained in the control of the group calling themselves “Cyber Caliphate” for nearly 14 minutes till 10.59 am, when Twitter’s support team regained control of the account at the publication’s request.

The hackers tweeted threats to President Obama, the First Lady and their daughters in a message warning of a “Bloody Valentine’s Day.”

Newsweek account’s profile picture and banner were changed to images of a masked man and the Black Standard flag, and declared “Je Su IS ISIS,” in an image uploaded as the header picture on the Newsweek Twitter profile and gave a brief description of their activities and why they were hacking Newsweek. 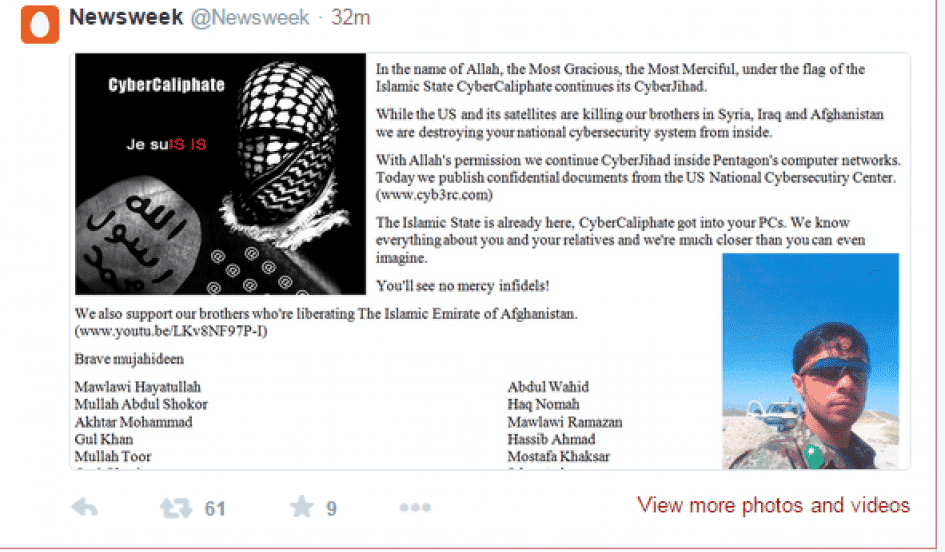 The news outlet confirmed the hack and said it had regained control of the account.

“We can confirm that Newsweek’s Twitter account was hacked this morning, and have since regained control of the account. We apologize to our readers for anything offensive that might have been sent from our account during that period, and are working to strengthen our newsroom security measures going forward,” Newsweek said in a statement.

Now everything seems well under control with Newsweek making this tweet just minutes before we went to press.

The connection of the hack to Taylor Swift account means that the infamous band of hackers, Lizard Squad may also be involved in Newsweek Twitter hack as well.  Since Twitter has already suspended the Twitter accounts of the group, this could not be independently confirmed as of now but Techworm is investigating the matter.