Facebook has rolled out a set of tools to keep a check on its users who are having suicidal tendencies and prevent these users from suicidal attempts. In case some user is having suicidal thoughts and mentions that in the Facebook posts and if a friend of that user reports it to Facebook then a third party will immediately review the post and Facebook would lock the suicidal user’s account and the user will be made to read Facebook’s suicide prevention materials.

Shane Tusch, a resident of San Mateo, wanted to check out if this suicide prevention tool is real or not!

On 26th February 2015, Tusch posted his frustrations regarding the stress he had been facing due to first amendment made to his home loan by the bank. He posted that he was undergoing trouble paying his bank debts for quite some time and in the post he declared that he would take his life in some public place.

Tusch’s post read :”So I have decided to take my life in some very public way that will hopefully get people talking about the crimes these banks have payed off are governments and left their wives and kids in the streets. I think hanging myself from the Golden Gate Bridge with a big sign that says bank america killed me and left my wife and kids without a father or a home!” 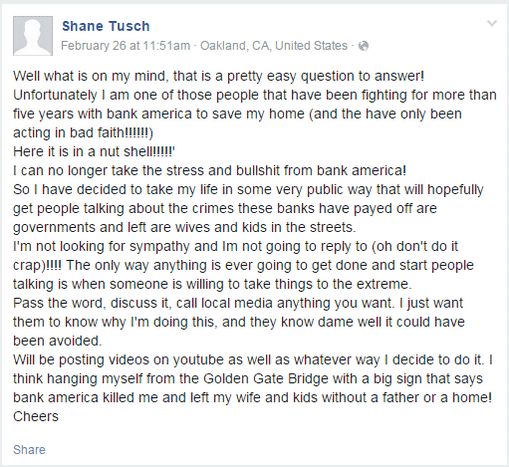 Tusch’s used his real Facebook profile to carry out the experiment and neither his family nor his friends knew about his experiment. Immediately, Tusch’s friends responded to his frustrations as they were worried about him and one of his friends even tagged Facebook to his post.

Soon Tusch’s Facebook account was locked and in the meantime some unknown person who read this post informed police. San Mateo police took Tusch in their custody and inquired him regarding the post which Tusch confirmed was written by him however he also made it clear to the police that he was not planning for a suicide, this was just to release his frustrations regarding the First Amendment made by Bank America and he wanted to get this in public.

Shane Tusch is a part time electrician by profession and also an activist.

Tusch was detained in a mental asylum for about 72 hours i.e. 3 days. Not only that it seems he was tested for TB, HIV and overall 7 blood tests done along with his urine tests. He also posted that he was kept in a very inhumane conditions.

With the depression being on its peak all around and people attempting suicides it seems that the step taken by Facebook to prevent the users from committing suicide is really good; however there has to be some proper methods which should be taken because if people like Shane Tusch are just using Facebook to release their frustrations on Facebook and get caught then it would be a great problem.

Besides if all people would be retained for 72 hours in mental asylum then that will be a great burden on the already overburdened mental health facilities, isn’t it?