Google unveiled a new feature called Smart Lock on Android 5.0 Lollipop on Friday. The feature will automatically detect when the Android smartphone user carries his smartphone and cut down of the number of times a user has to enter the  passcode to unlock their phones while they are out and about.

Normally the Android smartphones get auto locked after a certain period of time and it becomes irksome to unlock it again and again to carry on with a task.

The smart lock has a on-body detection uses the accelerometer in the phone to detect when it’s being held or carried. If enabled, the feature requires a passcode the first time the phone is accessed but then keeps the device unlocked until it is placed down.

With this feature enabled, the Android smartphone user will not have to unlock the device every time they take their phone out while walking. 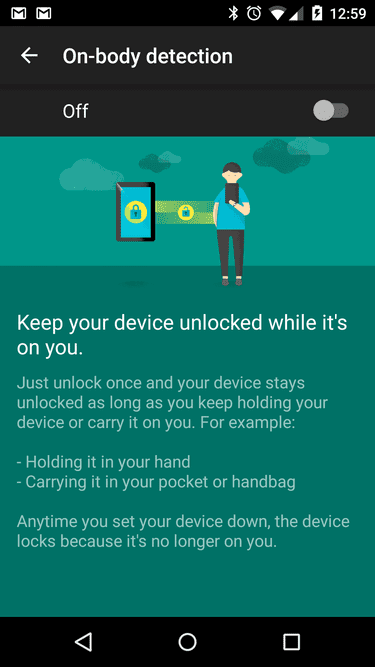 “If you unlock your device and hand it to someone else, your device also stays unlocked as long as the other person continues to hold or carry it,” reads a message on the device once it is enabled.

Another feature of smart lock is that it will remain unlocked when it sees a trusted face.

The smart lock feature also allows users to set zones around trusted places, such as a home or office, and Wi-Fi or Bluetooth devices, such as a computer or car radio. The device will remained unlocked once it has been unlocked if it taken to these zones.

Google said that the feature has been enabled in Android 5.0 Lollipop and would slowly reach all lollipop users. The disadvantage of smart lock it cant identify the owner hence it may remain open for intruders also. Therefore readers are suggested to kindly verify its practical use before enabling this feature.