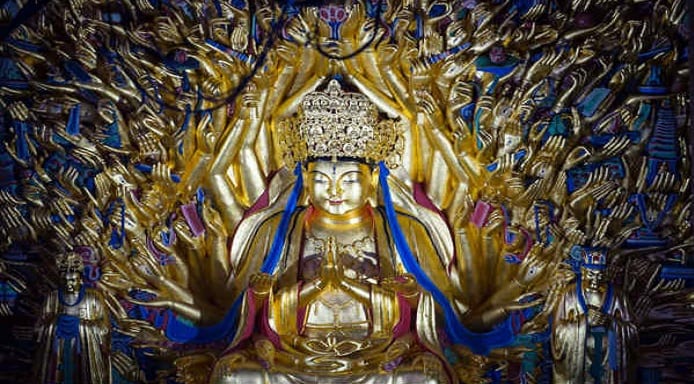 Chinese experts have completed refurbishment of an 800-year-old Buddha statue, famous for its 1,000 hands, situated in the country’s southwest region after seven years.

The re-establishment of the important landmark in Dazu County in Sichun province had begun in 2008 and was completed at a cost of about 60 million yuan (USD 9.8 million).

Workers restored 830 hands and 227 instruments using one million gold foils, while consolidating the dated pieces of the statue and cleaning it thoroughly. It is the largest restoration project on the statue, which undergo repairs at least four times in history.

The project is expected to help the Qianshou Guanyin keep glowing for atleast 50 years, said Zhan Changfa, a researcher at the Chinese Academy of Cultural Heritage, who is in-charge of the project.
The statue, which is 7.7 metre high and 12.5 metre wide, was carved during the Southern Song Dynasty (1127 to 1279 AD).

Listed as a major World Heritage site by UNESCO in 1999, it is a masterpiece among thousands of individual rock carvings in Dazu grottoes. The carvings date back as early as the Tang Dynasty (618-907 AD). Over the centuries, the sculpture’s colour had faded with some of the gold foils peeling off and cracks appeared.

Tong Mingkang, the Deputy Head of State Administration of Cultural Heritage said that for the time being, the authorities will continue to examine the statue’s condition and take appropriate steps to avoid damage to its beauty atleast for the next 800 years.