Research suggests that your health may affect depending on the month you are born.

As per the old mythology, people try to link many things when the child is born (personality, favourite colour and ideal careers) usually with no scientific support.

Scientists find surprising link between Birth Month and Disease Risk. “It turns out that if a newborn is exposed to high levels of dust mites in their first few months of life then they have higher possibility of a certain type of asthma later,” says Nicholas Tatonetti, PhD, an assistant professor of biomedical informatics at Columbia University Medical Center and Columbia’s Data Science Institute.

The record states that 1.7 million patients treated at NewYork-Presbyterian Hospital/Columbia University Medical Center between 1985 and 2013, the researchers used an algorithm to look at relationships between birth month and disease risk. The objective was to see if there were any spikes in specific diseases at certain times of year.

The research concludes that the babies born in the month of May have the lowest disease risk and October babies have the highest, closely followed by November. In fact, the scientists found 55 diseases that allied with the season of a person’s birth, and also revealed 16 entirely new correlations including nine types of heart disease.

“It’s important not to get overly nervous about these results because even though we found significant associations the overall disease risk is not that great,” said lead researchers and data scientist Nicholas Tatonetti in a press release.

People born in the month of March have the highest risk of atrial fibrillation, congestive heart failure and mitral valve disorder, and the scientists suggest that 1 in 40 cases is related to a seasonal variable. The scientists suggest this may have something to do with fluctuating levels of vitamin D. Since heart disease is the leading cause of death in the United States, this could help doctors work on early prevention strategies.

Their study helped to verify the findings from 39 previous studies on birth season and disease risk, and recommend that “seasonally dependent early developmental mechanisms may play a role in increasing lifetime risk of disease,” according to the paper published in the Journal of the American Medical Informatics Association. 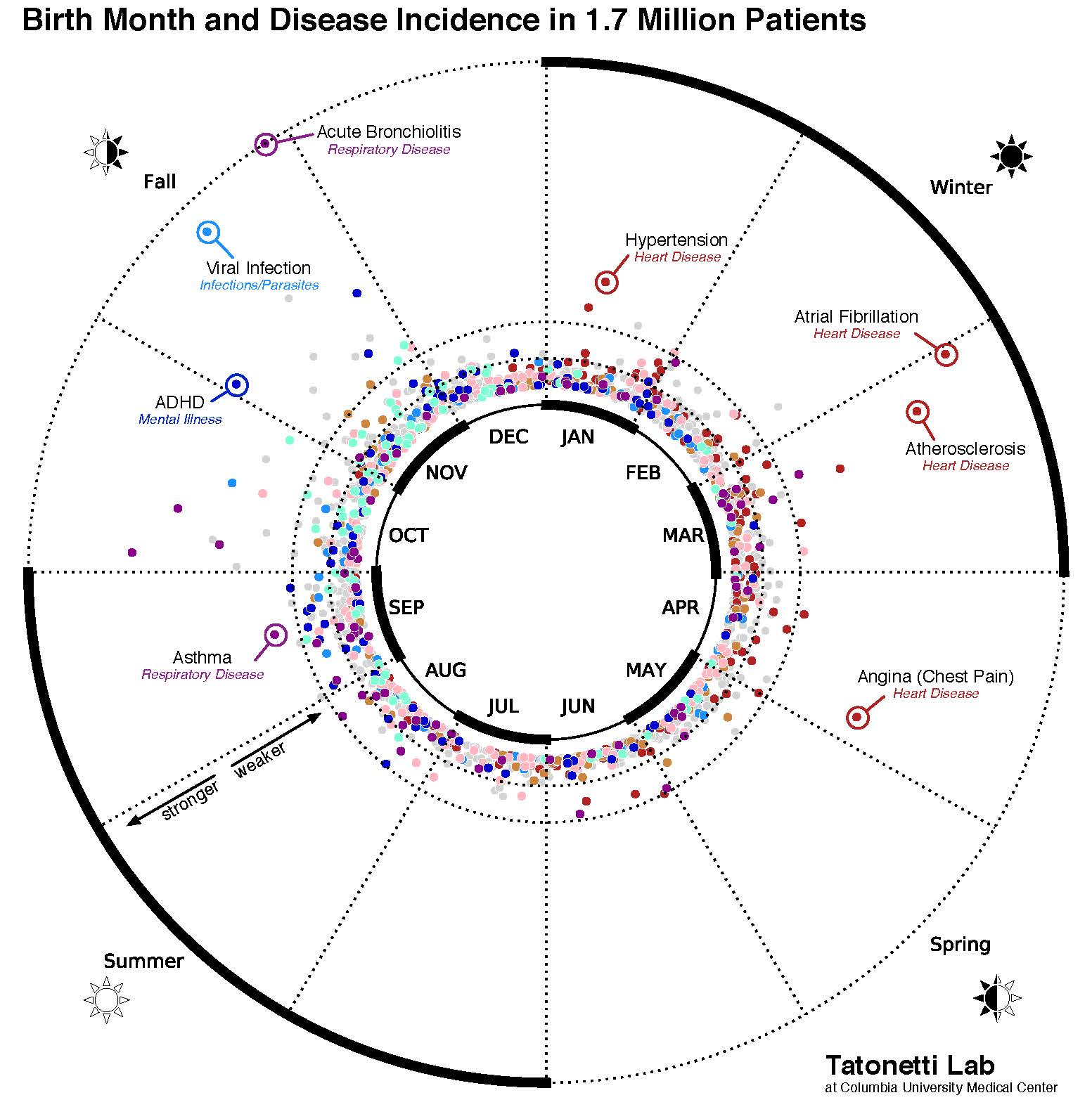 The researchers found that asthma risk for New York patients peaked with July and October births. A previous study conducted in Denmark found that risk was heightened for people born in the months of May and August when the country’s sunlight levels are most similar to New York’s.
“Astrology puts a lot of collection on what month you were born in, and that really hurts this type of research, since there isn’t much scientific proof to support that,” Tatonetti said Alice Park over at Times.

Regardless of how old patients were or their sex, there were certain months that were more closely associated to the risk of particular diseases than others. For instance, people born in the month of September seemed to have a higher risk of asthma, while those born in the month of November were slightly more likely to have ADHD.

After mapping the data the researchers kept in mind that the results are from the Northern Hemisphere, and so the seasons are opposite for those of us on the other side of the world. LiveScience have also created this handy infographic so you can rapidly chart your risk of developing certain conditions depending on when you were born.

Apparently, there are some serious limitations of this study – mainly the fact that all the data was taken from patients admitted to a hospital in New York. But the researchers now hope they can use their algorithm to perform further research on broader datasets.

The media reporting of this study suggests that the month you’re born in is a way to foresee how you will become ill or die and should be taken very carefully at this stage. Future research will be needed to see if the same links are observed in studies conducted in different regions and then discover possible reasons behind these associations.

For now, this study does not provide any evidence that being born in a particular month is more or less likely to develop any particular disease.

There is nothing you can do about the month you were born in, but you can take steps to reduce your risk of disease in later life i.e. have a healthy diet, take regular exercise, avoid smoking, moderate your alcohol intake and maintain a healthy weight.