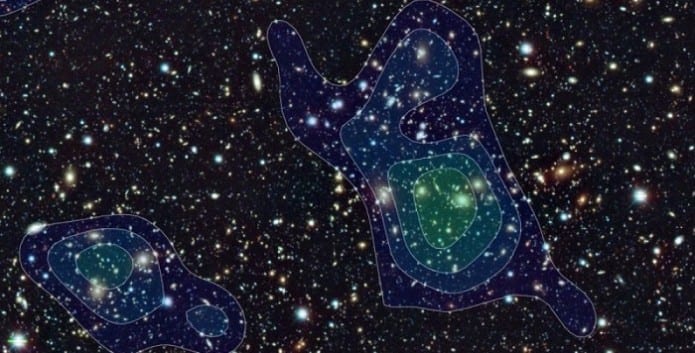 Dark Matter Map will Reveal how the Universe Expanded : Study

Researchers are now ready to map the Dark Matter which in turn would unveil the process of distribution of dark matter and the changes it undergoes to understand the power of dark energy in the expansion of Universe.

Tokyo: Researchers from the National Astronomical Observatory of Japan (NAOJ), the University of Tokyo and other institutions have begun a wide-area survey of the distribution of dark matter in the universe using Hyper Suprime-Cam, a new wide-field camera installed on the Subaru Telescope in Hawaii.

The initial observations covered an area of 2.3 square degrees on the sky towards the constellation Cancer and the results revealed nine large concentrations of dark matter with each about the mass of a galaxy cluster.

Researchers believe that it is essential to survey how dark matter is actually distributed and how this distribution keeps changing over a period of time because this would ultimately help in understanding the role of dark energy which in fact controls the expansion of the universe.

These initial results have thus proved that now astronomers have the technique as well as the tool which would help them further explore the secrets of dark matter and in turn understand the dark energy and its role in the expansion of universe.

As a next step, astronomers would need to expand their survey so as to cover a thousand square degrees on the sky for unraveling the mystery of dark energy.

Thus, mapping the dark matter over a wide range, is the key to understand the properties of dark energy and in turn the early history involved in the expansion of the universe.

Leader of the research team, Dr. Satoshi Miyazaki, from the National Astronomical Observatory of Japan’s Advanced Technology Center, praised the ability of the HSC for this work. He said: “Now we know we have them both, a technique and a tool for understanding dark energy. We are ready to use Hyper Suprime-Cam to create a 1000 square degree dark matter map that will reveal the expansion history of the universe with precise detail.”

For the study to be a success, astronomers would need a large amount of data which they can get by observing galaxies which are more than a billion light years away, in addition they would also need to map the data across a wider area that should be more than a thousand square degrees on the sky.

The initial results obtained from Hyper Suprime-Cam has been published in the 1st July 2015 edition of the Astrophysical Journal.