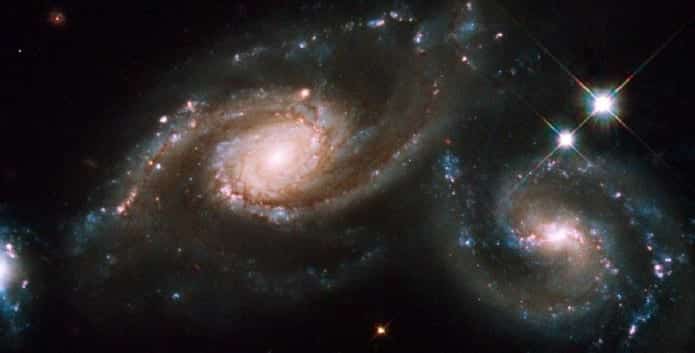 Scientists conducted a study of more than 20,000 merging galaxies and discovered that upon collision of two different sized galaxies, the smaller galaxy is stopped from making new stars by the larger galaxy. They also discovered that in case the collision occurs between two similar sized galaxies then the result would be production of stars at a much faster rate in both the galaxies.

Astrophysicist, Dr. Luke Davies, from the University of Western Australia node of ICRAR said: “Our nearest major galactic neighbor, Andromeda, is hurtling on a collision course with the Milky Way at about 400,000 kilometer per hour.”

However, it would take at least another four billions for both of these to collide, hence there is no need to panic.

Until now, astronomers believed that whenever two galaxies collide with each other it results into formation of new stars which occurs at a much faster rate, than if they remained separate.

However, the recent study shed light on the fact that the rate at which a galaxy produces stars depends on the size of galaxy in this galactic car crash.

Dr Davies thus says: “When two ‘giants’ collide, they both increase their stellar birth rate, but when one galaxy significantly outweighs the other, the ‘giant’ begins rapidly forming new stars, whereas the ‘dwarf’ suddenly struggles to make any at all.”

Dr Davies further explained that whenever two different sized galaxies collide the bigger galaxy would strip away the smaller companion’s gas, which is the essential fuel used by galaxies to form stars. On the other hand, it could also be possible that the larger galaxy stops the smaller galaxy from obtaining the new gas which is required to form more stars.

He thus concluded that: “When the Milky Way collides with Andromeda, they will begin to affect each other’s star formation, and will continue to do so until they eventually merge to become a new galaxy, which some call ‘Milkdromeda’.”

The details of the study has been published in the journal Monthly Notices of the Royal Astronomical Society.