Another patent has been added to Boeing’s list of patents and this time it is a flying drone which can be converted into a submarine as per the need.

It was in the month of April this year, when United States Patent and Trademark Office had approved Boeing’s Nathan Hiller’s patent application for a “Rapid deployment air and water vehicle”.

“Rapid deployment air and water vehicle” just means a remotely operated flying drone that can transform into a submarine and be on a secret mission helping the Navy and Air Force to get the required data.

Let us understand the working of this unique air and water vehicle:

The drone, which is operated remotely, is then detached from the carrier aircraft and it will start flying on its own.

When there is a requirement for underwater mission, the flying drone would dive into the water.

The aircraft would be designed in such a manner that once it dives into water, the drone is able to shed its wings and propellers by using explosive bolts and water soluble glue. This is essential because with the removal of wings the weight is reduced and this optimizes the hydrodynamic properties of the ‘submersible drone’.

According to Boeing, for the purpose of propulsion the vehicle would be provided with a single unspecified engine, which will work in air as well as water.

The submersible drone would make use of the on board ballast tanks to keep a check on its depth in deep waters.

While playing its role of a submarine, the submersible drone could be used for undersea reconnaissance, wherein it can be used as a spy to keep on eye on the movements of potential enemy. On the other hand it can also be used to deploy the payload of supplies or weapons.

Once the requirement or underwater mission is over, the submersible drone would rise to surface of the waters and transmit the data which it collected either to other drones or the to main command center. 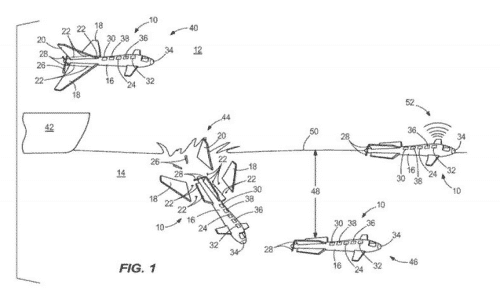 The United States Patent and Trademark Office describes the Boeing’s Nathan Hiller’s patent as below:

This seems to be a scene from sci-fi movie when a remote controlled flying drone just dives into water and gets converted into a submarine and is on a secret mission and once the mission gets over it comes to the surface of the water and provides all the necessary details to the officials, isn’t it?

Right now, Boeing’s patented drone is still on the papers and is an idea which has not even reached the conceptual stages.

Patent Yogi has released a video which beautifully explains the working of Boeing’s flying drone that can transform itself into a submarine.