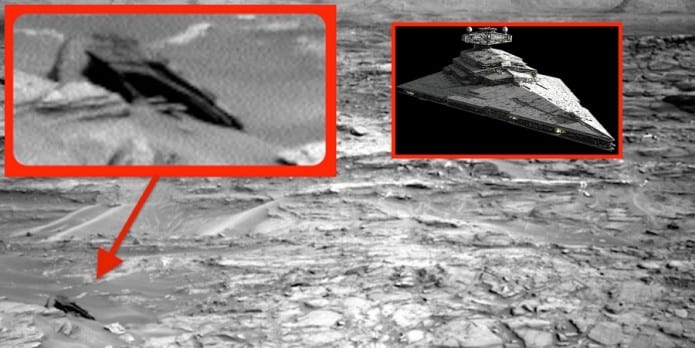 UFO lover claims to have spotted a crashed UFO, in the recent photos of the rugged Martian surface, which was captured by NASA’s Curiosity rover and it has resemblance to the famous Star Wars ship.

A recent photo taken by NASA’s Curiosity rover, that is on the Mars mission, shows some black object on the rugged terrain of Mars surface, which according to some UFO lovers, resembles the famous Star Wars ship -“Star Destroyer”.

NASA’s Curiosity rover was designed by the engineers at NASA’s Jet Propulsion Laboratory and it is a sort of Mars Science Laboratory. Primarily, Curiosity aims to find if Mars “is” or “ever was” suitable for life. Another aim of the rover is to get information regarding the environment of Mars.

The editor of UFO Sightings Daily, Scott Waring says: “I found this anomaly in the latest Curiosity Rover photo. The black object looks like a crashed UFO.”

Thus the UFO lover believes this “crashed UFO” bears resemblance to the very famous Star Destroyer warship which are found in the Star War flicks and a fan of Star Wars would immediately recognize the similarities between the crashed UFO and the film’s warships which are known for their firepower that forces the enemy ship to either get destroyed or surrender.

The major difference being the actual Martian crashed UFO is much smaller, whereas the warships seen on the silver screen were 500 times larger than the Mar’s object.

According to Waring, the “craft” is a small one and around 2.5 to 3 meters across, hence he adds “so it probably only held a few passengers”.

Waring writes: “There is only one photo of the ship. The rover usually takes many of each area, but not this one. Perhaps tomorrow it will take more.”

Some UFO enthusiasts who have commented on UFO Sightings Daily universally believe that the black object does seem to be like a flying craft.

Though, some non-believers feel the black object has nothing to do with UFO or flying crafts; on the contrary they believe it is just an odd shaped rock.

Regardless of these oppositions, some UFOlogists are undaunted and staunchly believe that the “UFO” does resemble a Star Destroyer from the Star Wars movie.

Now, it would be better for the readers to check for themselves and reach a conclusion regarding this “mysterious object” detected on Mars.

Well, until we all decide, if “Star Destroyer” actually does exist on Mars and is not just fictional, Waring and other UFO lovers will surely wait for new photos and new discoveries by the Curiosity rover.

Up until now, Curiosity rover, has reported some of the intriguing objects on Mars which includes the most talked about “space boobs” wherein UFO lovers say they have spotted an “alien woman with breasts and long hair”. Besides, just two days back they had spotted a “lizard” who was on “high alert” due to presence of the rover.

So this month has been really special, because along with lizards and the woman it seems UFO lovers also spotted some “awesome Martian space crab” and now a “Star Wars spacecraft” !