It looks like Google adds just a little more to the operating system every time it comes with a new version of Android making it more useful to the users. Earlier this year, when it released the Android 6.0 Marshmallow Developer Preview at Google IO 2015, which at the time was known as Android M, one of the changes that Google announced was the better management of the battery. This brought in a feature called “Doze”, wherein if your Android phone is inactive for a long period of time, it will primarily kill of app refreshes running in the background and save for absolutely necessary apps. 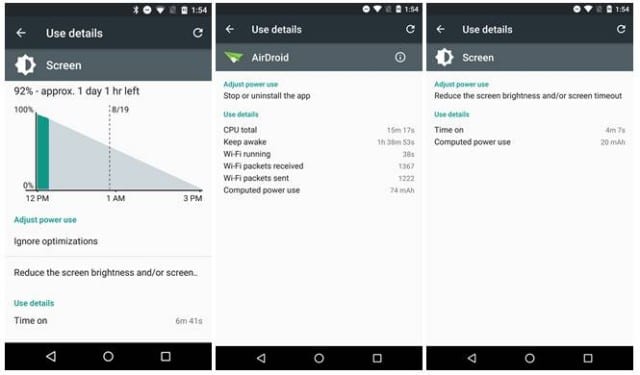 This eventually exchanges app refreshes for better battery life. Having said that, thanks to a report from Android Police, it really looks like Android 6.0 Marshmallow will have a lot of battery management features. With the latest preview release for Marshmallow, you can now check your battery usage on a single per app basis in mAh hours.

This could be particularly useful to people who are curious to know how many mAh from their battery are being eaten up by specific apps the most each day by providing more information to users. These sorts of details will obviously vary depending on how much you use certain apps, but no matter how large your battery this gives you one more to break down your battery use data.

It also could be a good way to find out if your battery is starting to lose its charge. So, for all those Android users who like to control every part of their handsets including its battery life, this is a pretty effective feature to look forward to in the near future. But whether or not Google keeps this function in the final release of Android 6.0 is still unknown.

KFC Reveals The KFConsole, A Gaming PC With Chicken Warmer

Bill Gate Reveals Why He Prefers Android Over iOS