Microsoft to discontinue Windows 7 and 8.1 from November 2016

Now that Windows 10 has been launched and in a full flow, Microsoft CEO, Satya Nadella has decided to pull the plug on the iconic Windows 7 and the forgettable Windows 8.1. If you still want to buy a PC that comes with Windows 7 or 8.1, you’ve got less than a year.

ZDNet found out that the Redmond based tech giant will shutter Windows 7/8.1 from November 2016 from Microsoft’s “Windows lifecycle fact sheet” which was published in the last week of October. 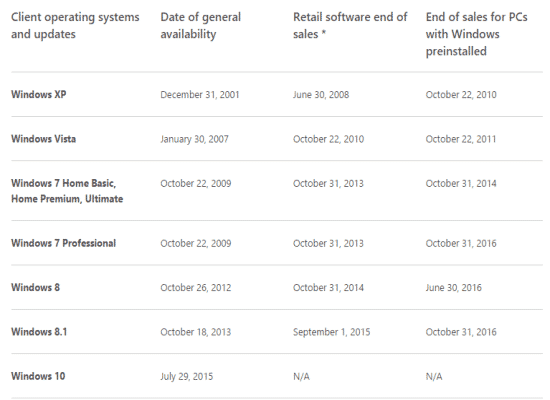 The Windows lifecycle factsheet shows that Microsoft has opted for October 31, 2016, as the “end of sales for PCs with Windows preinstalled” for both Windows 7 Professional and Windows 8.1.

Apparently after that date, the only choice for Windows PC buyers will be to purchase new computers with Windows 10 installed. The lone exception will be businesses with license agreements that entitle them to choose which version of Windows they want preinstalled.

Despite the extended deadline for Windows 7 and 8.1, Microsoft is heavily pushing Windows 10. In fact from 2016, the Windows 7 and Windows 8.1 will get Windows 10 as a “recommended update.”