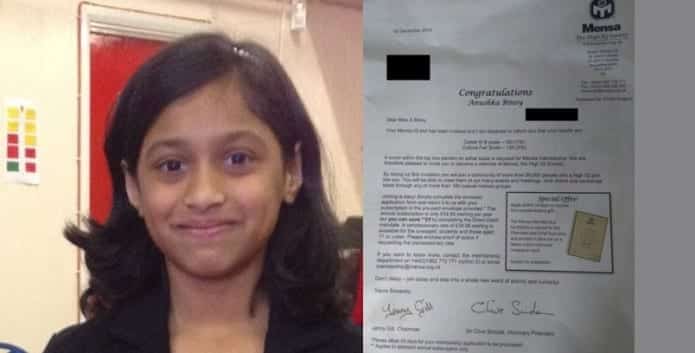 Anushka Binoy, of Isleworth , scored 162 to gain membership of the exclusive society, where entry is reserved for Britain’s brainiest 2%. The average IQ is 100 and a score of over 155 on the Cattell III B scale puts you in the top 1% of the population.

What is this Mensa IQ test and why is it so important:

Mensa is considered to be one of the oldest intelligence society in the world and it accepts only those individuals as members who score in the 98th percentile on an IQ test.

Eligibility criteria for any person to get the membership is to score at least 132 or higher.

A member of Mensa requires to pay an annual fee of £55 to stay connected with other intelligent members of Mensa through conferences, gatherings and other similar interest meets.

Proud father Binoy Joseph said he always knew his daughter was smart but hadn’t realised quite how remarkable.

“She loves reading quite advanced books and she memorises a lot of what she reads, so I knew she was pretty special but I was amazed when we got the results back. We’re very proud of her,” he said.

Hailing from Kottayam district of Kerala, Anushka’s family has been living in Isleworth in London in 2007. She is a student of St. Mary’s Catholic Primary School, Isleworth, and enjoys violin, dance, swimming and tennis. Anushka has a younger sister, Andrea Binoy, 3.