These 30 amazing optical illusions will amaze you

What is an optical illusion?

An optical illusion (also called a visual illusion) is characterized by visually perceived images that differ from objective reality. The information gathered by the eye is processed in the brain to give a perception that does not tally with a physical measurement of the stimulus source.

There are many types of optical illusion, some natural and some man-made but all of them give us a glimpse into our incredibly complex minds. At the end of it, it’s all in your head.

Check out the compilation list of 30 most incredible optical illusions. When you look at the picture, the circles may look intertwined. But, what actually you see are 4 perfectly round circles. When you focus on one wheel, you will see it’s not moving. But when you move your eyes around from one wheel to the next, all of them appear to be spinning. By focusing again on any wheel individually, it will stop turning, but the wheels around it will.

Stare at the black plus sign (“+”) in the center of the image. First, the moving dot turns to green. Then as you continue to stare, all the pink dots will disappear, and you will only see only a single green dot rotating. After some time, you will see the dots disappear, but reappear briefly after being passed by green dot. Dots in certain positions disappear quickly and dots in other positions can persist for several additional rotations of the green dot. The picture says it all…. When you focus on the center point, you will see that the circle is expanding. A cool optical illusion that shows how things can drastically change just by changing your perspective. 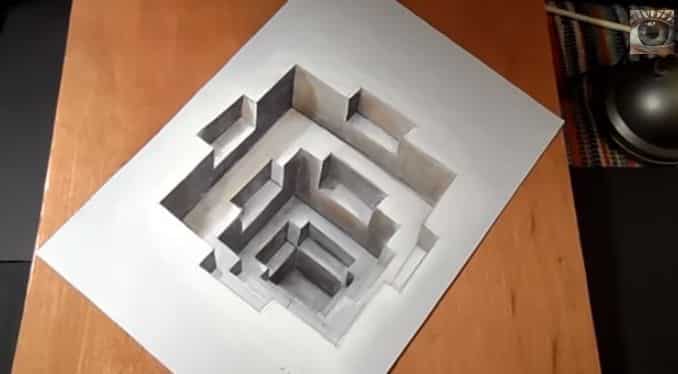 A simple twist suddenly changes what you thought was a cup is actually a warped drawings that appears 3D when viewed from the right angle. Stare at the black dot in the middle. You should see the outer edges of the circle fade away!

When you look at the picture, you will feel that the lines are not parallel. But on a closer look, you will actually find that even though the lines appear to be diverging from one another they are in fact quite parallel. The black and white picture appears to show a large elephant, however, on a closer look there are a number of different creatures hidden into the body. Can you guess how many? Do we need to say anything more….. All of these dots are white, but some appear to be black. This is a classic optical illusion named after Ludimar Hermann who discovered it in 1870. At every point where the white lines intersect our eyes perceive a gray, shadowy blob. However, the blob disappears if you look directly at one of the intersections. Created by Italian psychologist Gaetano Kanizsa in 1955, the Kanizsa Triangle is a classic example of illusory contours. When you look at the image your brain creates contours (outlines) a white equilateral triangle although none exist. In reality, it is an illusion created by the wedges and the angles. This is one of the most famous optical illusion pictures of an impossible object. It appears to have three cylindrical prongs at one end which then mysteriously transform into two rectangular prongs at the other end.

Named after the Polish-American psychologist, Robert Jastrow in 1889, the bottom figure appears to be larger although they are both the same size. This is because the shorter edge of “A” is directly adjacent to the longer edge of “B”. Described by the British psychologist Sir James Fraser in 1908, the Fraser spiral illusion is an optical illusion where the overlapping black arc segments appear to spiral into infinity; however, the arcs are actually a series of concentric circles.

Constructed out of legos, this variation of the endless staircase optical illusion is also an impossible object like the blivet. It is also sometimes called the “Penrose triangle”. Created by Johannes Stoetter, a former world champion body painter, it is amazing how a female model has been transformed to look like a parrot. The Zollner illusion is a classic optical illusion where a pattern surrounding parallel lines creates the illusion that they are not parallel.

Created by web designer Nobuyuki Kayahara, this is a very bizarre dancer optical illusion. At first glance, the spinning lady appears to be spinning in a clockwise motion. However, if you look at the spinning dancer long enough – the lady will appear to change direction and start spinning counter-clockwise. Can you tell which of these two monsters is bigger? By now, you would have obviously guessed that they are both the same size. Or are they? This is a perspective illusion. These two blocks are actually the same shade of grey. Place one finger along the centre of the line blocking the darker and lighter parts to check.

Watch as your mind gets tricked into forming a 3D image of what seems to be a rotating cube.

When you focus closely on that middle dot while the grid rotates, the three yellow dots on the outside will begin to disappear. If you shift your eyes away from the centre, the dots will all reappear. It is a trick of the eye that can cause a person to lose sight of stimuli that are in plain view.