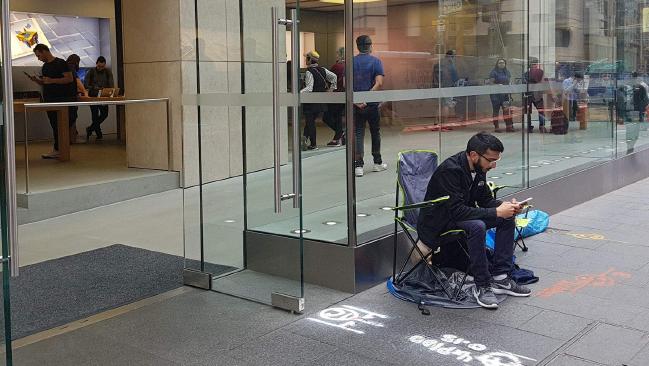 This man in Australia has been camping outside Apple Store for 10 days, wants to be the first to buy new iPhone X

Apple fanboys have a reputation for being very, very loyal to Apple and iPhone. But do Apple fanboys really just buy anything Apple sells or they just make noise? Do they sing the praise of anything and everything Apple does?

Apparently, the answer to all the above questions is yes. Over the years since Apple introduced its first iPhone, we have had news of Apple fanboys doing amazing things to get their hands on the latest Apple product and 2017 September is no different.

This year’s Apple iPhone X launch saw one such Apple fanboy, Mazen Kourouche from Australia. Mazen owns a YouTube channel which has videos of various Apple products. This year as Tim Cook was launching iPhone X (pronounced iPhone Ten) in Cupertino, Mazen was doing something absolutely unbelievable. Mazen has been perched outside Sydney’s flagship Apple store for a whopping 10 days to lay his hands on the new iPhone when it goes on sale on September 22 in Australia.

Mazen’s craziness about laying his hands on the new Apple iPhone 8 or iPhone X can be deduced from the fact that he refused $50,000 to give his perch to another Apple fanboy. Yes, Mazen refused $50,000 to give his seat in the line outside Apple Flagship Store in Sydney as he wants to ensure that he is the first customer – not only in Sydney but in the world – to buy the newly launched iPhone

What is more, Mazen has been live streaming his stay outside the Apple Flagship store on his YouTube channel.  He is also being helped by two of his friends who are making sure that Kourouche doesn’t lose his spot as the first customer in line.

Yes, likes of Mazen do exist. Such is their love for Apple products that Samsung built a marketing campaign that portrayed iPhone users as mindless idiots. There is even a phrase “Apple sheep” used for Apple fanboys by Android users. Even Merriam-Webster got in on the action earlier this year when it used Apple fans as an example to illustrate the definition of the word “sheeple.”

We wish Mazen the Sheeple best of luck for his endeavor.