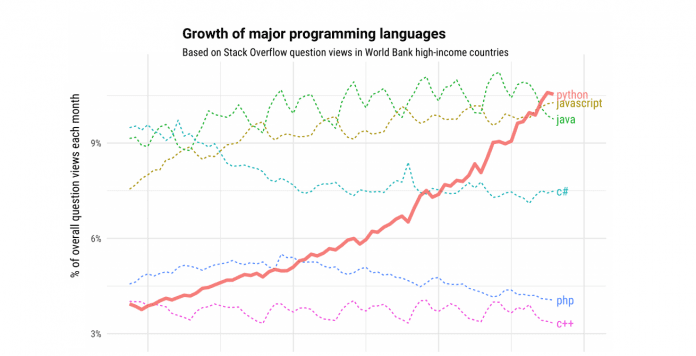 Java, JavaScript, C# or Python which is the fastest growing programming language

Stack Overflow has released data on the number of visits to pages with respective tags received. If you aren’t familiar with it, a tag denotes the category under which a question on Stack Overflow is categorized  with some examples being Java, JavaScript, AngularJS and so on. In the month of June, the number of visit to Python tagged pages has edged past pages tagged under Java and JavaScript which have traditionally held the top spot.

The method followed by the site can be a genuine indicator of the growth of a programming language considering the website receives 40 million visits on a monthly basis.Java and JavaScript have usually held the top spot by getting the highest number of visitors from developed countries such as the US and UK.

“We make the case that Python has a solid claim to being the fastest-growing major programming language,” said Stack Overflow data scientist David Robinson.

The popularity of a language depends on a wide range of factors, including education and wealth of the nations. Java usually experiences a surge in traffic during spring and a decline in summer since the language is taught in colleges and universities across the globe. The pattern of Python getting so many visits from developed nations might also be attributed to its use in academic and scientific research which generally form a more significant part of a developed nation’s economy than a developing nation’s economy. This co-relation is also made to a certain extent to explain the popularity of R.

However, recent trends have shown that Python might be the fastest growing language even in non-wealthy nations now and is growing faster year-on-year than in more developed countries. Among countries that are not considered to be wealthy, Python ranks 8th. The Python Software Foundation believes that Python is popular because of its versatility, which is also why it is used in system operations, scientific modelling, etc.

Robinson feels that the traffic towards Python will eventually increase while that towards Java and JavaScript will remain the same. “Python is an unusual case for being both one of the most visited tags on Stack Overflow and one of the fastest-growing ones. Incidentally, it is also accelerating. Its year-over-year growth has become faster each year since 2013,” writes Robinson.

Microsoft’s TypeScript, Apple’s Swift, Rust, and the Google-developed Go complete the list of other language that are considered to be growing fast, although none of them are as popular as Python. Python also ranked very high in Stack Overflow’s Developer Survey 2017 and it also earned the tag of the language most respondents wished to learn.