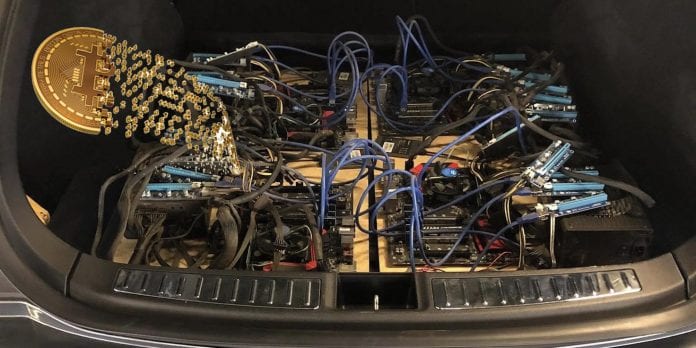 Bitcoin is one of the most discussed trends all over the world and with it recently breaching the $11,000 mark recently, it is undoubtedly the ‘king of cryptocurrency’. As a result, more and more people are looking to mine their own cryptocurrency. However, the cost of running the rigs that mine the Bitcoin or other cryptocurrencies require lots of computing power and high power consumption that could apparently eat into profits of crypto miners.

For those unaware, Bitcoin is a virtual currency of the Internet also called “cryptocurrency”. In simpler terms, Bitcoins are virtual coins that are transferred over the internet. The cryptocurrencies can be transferred directly between individuals bypassing the banking system and thus making the sender and receiver of every Bitcoin transaction nominally anonymous though he/she can be tracked through blockchain exchange.

Now, a wise Tesla owner has come up with an innovative and environment friendly idea of installing a mining rig inside the trunk of his Model S so that he can use the free electricity from Tesla’s powerful Superchargers to mine cryptocurrency. The owner posted a photo of the Model S-fitted miner on the Tesla Owners Worldwide Facebook group, which was first spotted by Eco Motoring News.

Looking at the images, although the owner has built a setup for GPU’s but the mining rig lacks GPUs and is probably not being used to mine Bitcoin (requires ASIC chips), but it could be mining other cryptocurrencies like Ethereum. According to the owner, he is consuming free energy that comes with the Supercharge network to power the mining rig. However, the question here is it really worth all the efforts and cost effective?

According to Motherboard’s calculations, the monthly income that one can generate by running the miner from your trunk just about equals the average monthly lease for a Model S. Also, concerns about the thermal management arise such as waste heat generated by the miners inside the vehicle which may probably not be safe while driving. So, mining cryptocurrency from the back of a Tesla vehicle may actually not be feasible after all.