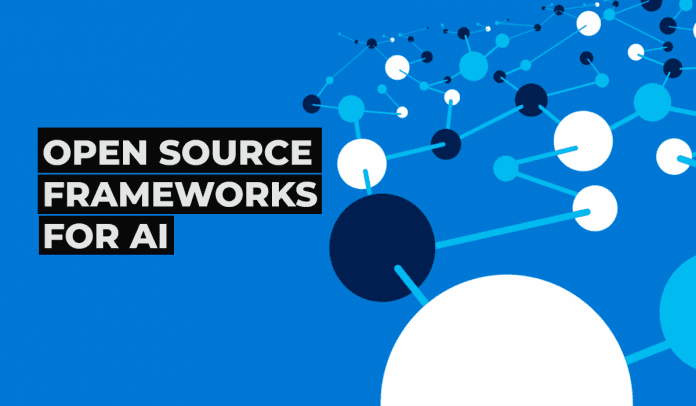 Artificial Intelligence (AI) and Machine Learning (ML) are the two terms that are trending these days and sometimes even used interchangeably. However, both the terms are not the same. While AI involves machines that can perform tasks that are characteristic of human intelligence, ML enables modern computers to learn without being explicitly programmed. Basically, ML has evolved from AI via pattern recognition and computational learning theory.

Big companies like Google, Microsoft, Facebook, IBM, and Amazon are heavily investing in their own R&D (Research and development), as well as purchasing startups that have made progress in areas like ML, neural networks, natural language and image processing.

In this article, we have listed 5 best open source frameworks for AI development that seem particularly promising or interesting:

TensorFlow is Google’s open-source software library built for deep learning or artificial neural networks. It was developed by the Google Brain team within Google’s AI organization and released under the Apache 2.0 open source license on November 9, 2015. TensorFlow carries out numerical computations using data flow graphs. It has a very flexible architecture that allows easy deployment of computation across a variety of platforms (CPUs, GPUs, TPUs), and from desktops to clusters of servers to mobile and edge devices.

Tensorflow can produce C++ or Python graphs, which represent the movement of data running through a system. Its website offers tutorials and resources, which help the developers who have less knowledge about it. By open sourcing the TensorFlow library of ML code, Google is aiding in simpler construction, training, and deployment of complex deep neural nets. Google, Intel, Uber, Qualcomm are some of the companies using Tensorflow.

CAFFE (Convolutional Architecture for Fast Feature Embedding) is a very fast, powerful, and efficient deep learning framework. It is open-source and is written in C++, with a Python interface. Caffe supports many different types of deep learning architectures geared towards image classification and image segmentation. According to its website, it can process more than 60 million images in a single day using just one NVIDIA K40 GPU. It supports CNN, RCNN, LSTM and fully connected neural network designs. It also works well on GPU, which contributes to its great speed during operations.

Developed by Microsoft Research, the Microsoft Cognitive Toolkit – previously known as CNTK – is a deep learning framework meant to use neural networks to go through large datasets of unstructured data. CNTK is highly customizable due to its faster training times and easy to use architecture. It boasts outstanding performance whether it is running on a system with only CPUs, a single GPU, multiple GPUs or multiple machines with multiple GPUs. It allows you to choose your own parameters, algorithms, and networks. It’s written in Python and C++. Even though it is more popular in the speech recognition arena, CNTK can also be used for text, image and RNN training (recurrent neural network – a type of neural network).

Theano is a Python library designed for deep learning. It allows you to define, optimize, and evaluate mathematical expressions involving multi-dimensional arrays with a high level of efficiency. It can use GPUs and perform efficient symbolic differentiation. The tool comes with features including integration with NumPy, dynamic C code generation, and symbolic differentiation. The tool supports platforms such as Linux, Mac OS X, and Windows.

Written in Python, Keras is an open-source library written in Python that is capable of running on top of deep learning frameworks like TensorFlow, Microsoft Cognitive Toolkit, Theano, or MXNet. This high-level neural network API is designed to enable fast experimentation with deep neural networks. It focuses on being user-friendly, modular, and extensible. The tool is optimized for both CPU and GPU.