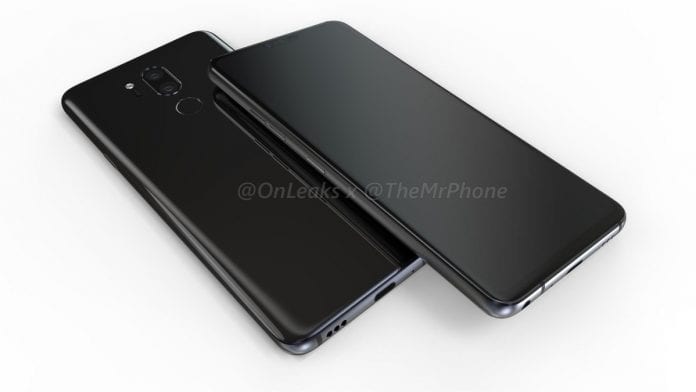 LG was supposed to debut its upcoming flagship, G7 at the Mobile World Congress (MWC) in February 2018. However, the company chose to skip the MWC. Then, leaked renders of a device named G7 (Neo) appeared at LG’s MWC booth, which was later scrapped off. However, the news surrounding LG’s G7 refuses to die.

Now, popular leaker @OnLeaks has made a 3D video of the upcoming LG flagship in collaboration with @TheMrPhone based on the designs and specifications leaked to @OnLeaks by accessory makers. However, LG G7 is yet to receive an official confirmation.

The video below show the device from all possible angles.

As you can see from the 360-degree video, the LG G7 sports a similar design to that of LG G6, and will feature a metal and glass design and an edge-to-edge display. However, the upcoming flagship G7 will include a notch in the screen to house the front-facing camera, light sensor and speaker. It will also have a 3.5mm headphone jack, USB-C port, and a speaker grille placed at the bottom. The new renders of the LG G7 also show that there is a vertically-placed dual rear camera with an LED flash module, and it also has a fingerprint reader on the back side.

The renders also show just one button on the left, which may likely be the power/ lock key, while the right side has three buttons, including a volume rocker and a mysterious key that might enable access to a personal assistant. The top side of the smartphone suggests two microphones, which could likely be to improve the sound, especially in voice calls and while recording videos.

There are rumors that LG is likely to unveil the G7 in April or May this year. Until the company officially unveils the G7, we can expect to hear and see more leaked renders of the device. Keep watching this space for more updates!