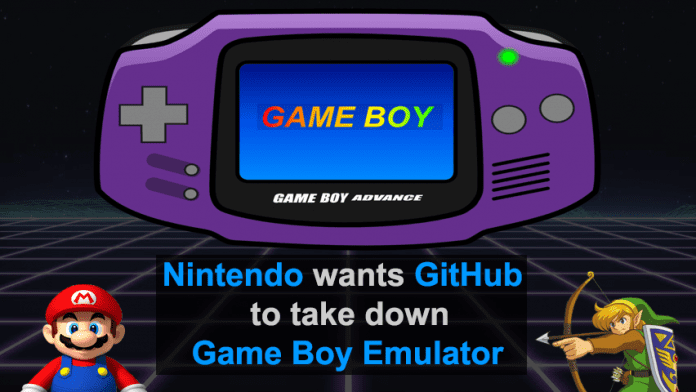 Last week, Nintendo, the Japanese gaming company behind the popular game like Nintendo Switch, filed and sent a DMCA notice to GitHub to shut down a JavaScript-based emulator hosted on the developer platform that allowed users to access Game Boy Advance (GBA) games, reports TorrentFreak.

For those unaware, Game Boy Advance games are required to be played through browser-based emulators. While dedicated gamers struggle to find a legitimate platform, there are a few websites that offer this option, although without permission.

Nintendo who is well-known for going after emulators and fan-made games that are based on its intellectual property, stated that it does not permit unsanctioned projects that are a clear copyright infringement. Hence, it asked GitHub to remove the JavaScript-based emulator.

In a DCMA (Digital Millennium Copyright Act) notice, Nintendo writes: ” The files located at the repository link https://jsemu3.github.io/gba/ contain unauthorized copies of Nintendo’s video game software in violation of the law and GitHub’s Terms of Service.”

GitHub complied with the request and removed the offending repository from its platform soon after. The emulator is no longer available through the site.

According to TorrentFreak, Nintendo is currently considering legal action against the owner of the infringing GitHub repository.

“We are considering action regarding those matters but are not including them in this notice,” Nintendo writes.

Apparently, Nintendo has already filed lawsuits against two ROM-hosting websites, LoveROMs  and LoveRETRO for copyright infringement. In response to Nintendo’s legal action, LoveROMs has closed down completely, with a message on the site informing visitors that “LoveROMs has been shut down”. While LoveRETRO initially responded by removed all Nintendo games, but it too has now “shut down until further notice”.