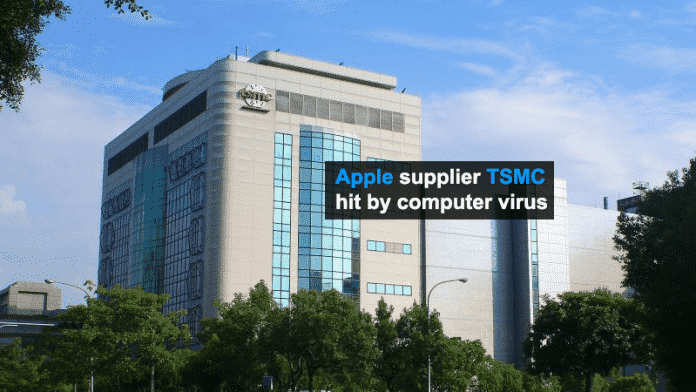 Taiwan Semiconductor Manufacturing Company, Limited (TSMC), sole maker of the iPhone’s main processor, was hit by a computer virus on Friday night that halted several of its fabrication plants bringing the production to a stand-still. This has come at a time when Apple is trying to speed up manufacturing for its upcoming iPhones.

While 80 percent of the fabrication tools affected by the virus outbreak had been restored, TSMC said that it expects full recovery on Monday.

“TSMC has contained the problem and found a solution, and recovery of the tools is in progress,” the Taiwanese company said in a statement.

For those unaware, TSMC is the only manufacturer of Apple’s latest A-series SoC and is a critical supplier of Apple and Qualcomm Inc.

The company also added that the virus wasn’t introduced by a hacker. The cause of this particular attack is still unknown at this point in time.

“TSMC has been attacked by viruses before, but this is the first time a virus attack has affected our production lines,” TSMC Chief Financial Officer Lora Ho said to Bloomberg on Sunday.

According to the company, the virus outbreak occurred due to “misoperation” during the software installation process for a new tool. Once the tool was connected to TSMC’s computer network, the virus started spreading through its network.

While TSMC has not indicated which customers could be affected, such a virus could potentially slow Apple’s output of new devices, cutting into the number of units sold. The shutdown will also result in shipment delays and additional costs.

The company said in a statement: “We estimate the impact to third quarter revenue to be about three percent, and impact to gross margin to be about one percentage point. The Company is confident shipments delayed in the third quarter will be recovered in the fourth quarter 2018 and maintains its forecast of high single-digit revenue growth for 2018 in U.S. dollars given on July 19, 2018.”