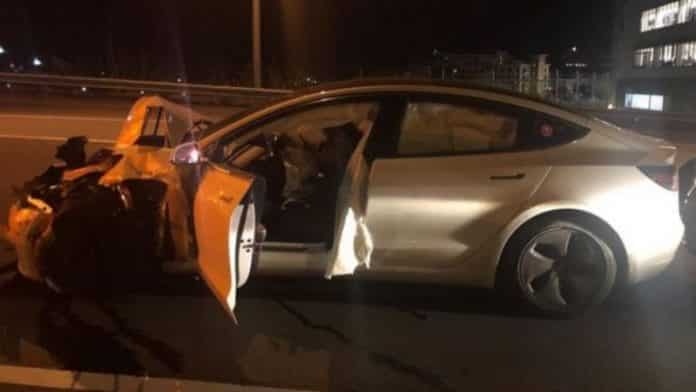 A Tesla Model 3 with Autopilot engaged crashed into a parked police cruiser and a disabled vehicle last Saturday in Connecticut, according to the State Police.

The incident took place on the state’s I-95 highway near Norwalk, Connecticut on December 7 in the early hours of the morning.

According to the Connecticut State Police, two troopers had responded to a disabled vehicle that was occupying the left-center lane of northbound I-95 near exit 15 in Norwalk.

Both troopers had stopped behind the disable vehicle with their emergency lights on, and also an extra flare pattern behind the cruisers was set up.

While waiting for a tow truck for the disabled vehicle, the Tesla Model 3 traveling northbound struck the rear of one cruiser and then continued north hitting the disabled motor vehicle.

The Tesla driver then continued to slowly travel northbound before being stopped several hundred feet away by the second trooper on the scene.

According to the Tesla driver, the car was on Autopilot mode at the time of the incident. The driver said he was not facing forward, as he was checking on his dog in the back seat.

Although the driver was not publicly named, he was issued a misdemeanor summons for Reckless Driving and Reckless Endangerment.

Fortunately, no one involved was seriously injured but the incident could have been more severe, state police noted.

“When operating a vehicle your full attention is required at all times to ensure safe driving,” the state police wrote in a Facebook post on Saturday. “Although a number of vehicles have some automated capabilities, there are no vehicles currently for sale that are fully automated or self-driving.”

The Autopilot feature on Tesla’s cars does not recommend drivers to remove their hands from the wheel while driving. In fact, Tesla’s website notes that “Current Autopilot features require active driver supervision and do not make the vehicle autonomous.”

This incident has brought to light the failures of automated technology on public roads. This is not the first time that a Tesla car on Autopilot mode has been involved in such an accident. In August this year, a Tesla Model 3 vehicle reportedly on Autopilot had caught fire after hitting a tow truck in Moscow.

Currently, the National Transportation Safety Board (NTSB) in the U.S. is investigating accidents caused by Autopilot.