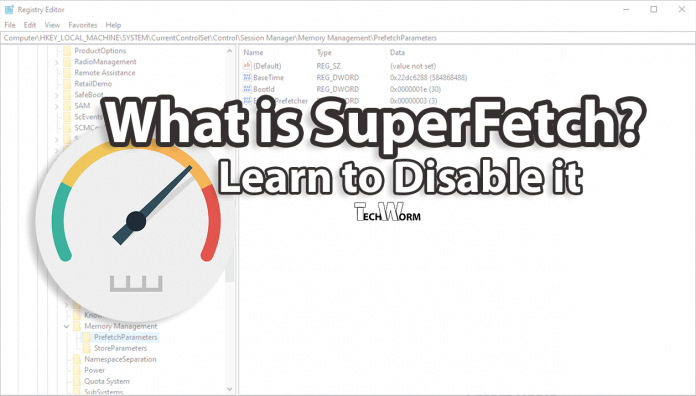 Slow PCs often test our patience when there a backlog of work and Windows computer won’t just keep up with your pace of things. Windows XP had things in order after the initial debacle with their first two service packs. Things smoothed out Service Pack 3 onwards.

Everything went south with the release of Windows Vista. Resource hogging, application incompatibility was the least of its problems. Vista introduced ReadyBoost, ReadyDrive and Superfetch to overcome the problem of memory ceiling, providing faster app loading, among other things to make the computer faster in operations for the user.

Note – SuperFetch has been renamed as “SysMain” process since the build 1809 RTM build 17763.1 of  Windows 10 that released almost 2 years back. Users on older builds can still find the SuperFetch option in their services app.

Superfetch is a caching technology feature that has a two-fold method to increase the available RAM for the applications and operating system to work on a higher scale of efficiency.

It is a successor to Microsoft XP’s PreFetcher which had the same goal with one key difference. SuperFetch increases the available resources by studying the usage pattern and making accommodations in the system accordingly, which sometimes helps in increasing the overall speed and efficiency of operations.

SuperFetch is applied to root path SystemRoot%\System32\Sysmain.dll in the form of a Windows services that itself runs under a Service Host process which can be found in the Task Manager.

First of all, SuperFetch emphasizes reducing boot-time and eventually enhancing the boot-up process.

Boot-up time is majorly dependent on the persistent interaction with Windows system files. SuperFetch streamlines the interaction by storing the files, data for boot-up in trace-files which significantly reduces the time required for locating and interaction with boot-up files.

SuperFetch also works with defragmentation that interfaces with file layout to boot-up files on the priority order of usage on the hard-disk. It performs the function once every three days. The required file layout is stored by the program in /Windows/Prefetch/Layout.ini.

Secondly, it works on reducing the launch time of the applications. It achieves that by preloading the frequently used application in your computer’s memory, based on usage patterns and routines. For instance, if you open Microsoft word > Excel > Opera web browser after turning on your computer and then Google Chrome, a few minutes later. It adapts and pre-load those programs to increase application launch speed.

Even though Windows has an in-built caching mechanism to be prepared for such functions, its function is rather limited. This is where SuperFetch comes on the top by analyzing, studying the usage pattern and adapting to it accordingly.

Do you need SuperFetch?

SuperFetch was launched, keeping in mind Vista’s requirement for excessive RAM for operations. As a result, the next-generation of the caching mechanism was released.

It is meant for reducing resource load on average, medium power computers. I’m talking about PCs with 2 GB, perhaps even 1 GB of main memory. Folks at Tom’s Hardware tested SuperFetch and had some impressive, positive results with low-end PCs with 2 GB of RAM.

Here is a check-list to consider to know if you need SuperFetch.

Is it safe to turn on/off SuperFetch

The answer to this lies with you. If your system does not show any sign of a slowdown, then it would be wise to keep it that way.

However, if you see full disk usage frequently as well as near-ceiling RAM consumption with almost no main memory left, then it might be time to turn SuperFetch’s knob off and observe the difference. Any unusual downgrade in performance would be the signal to disable SuperFetch for your computer.

How to Disable SuperFetch?

We do not encourage turning off SuperFetch since it helps in the overall improvement in the performance of the operating system. Use it at your discretion. As I have mentioned earlier as well, there is no need to turn it off unless there is a significant drop in performance.

There are two methods to disable SuperFetch(now SysMain.)

Before getting your hands on the registries, it is essential to create a backup of them to be on the safer side. You can take a backup of registries by going to File drop-down menu and clicking on Export. Save the backup in a secure location the storage with a proper name. Now, you are ready for the steps.

SuperFetch is a next-generation caching mechanism that here to stay for the foreseeable future. Although it has been renamed to SysMain from build 1809 onward, the functionality is the same.

Even if your computer does not show promising improvements after dealing with SuperFetch feature, then it might be time to look at other factors, both in terms of software management and hardware performance benchmarking.