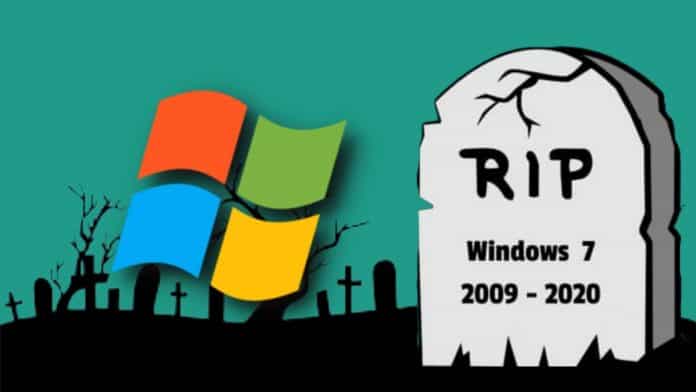 The long-dreaded date – January 14, 2020 – finally arrived and Microsoft’s Windows 7 operating system was officially declared dead. The Redmond giant ended all support for its decade-old operating system which reached the end of life.

Launched in 2009 to address its predecessor, Windows Vista’s poor critical reception, Windows 7 went to become one of the most widely used versions of Microsoft’s Windows operating system.

The end of support means Microsoft would now no longer be offering security updates or fixes, software updates or technical support for Windows 7. This leaves Windows 7 users, be it individuals, banks, medical facilities or other institutions, vulnerable to security exploits and software bugs. Apparently, around 400 million PCs are still running Windows 7 around the world.

Official documentation for Windows 7’s end of support says, “While you could continue to use your PC running Windows 7, without continued software and security updates, it will be at greater risk for viruses and malware. Going forward, the best way for you to stay secure is on Windows 10.”

Microsoft describes Windows 10 as “the most secure Windows ever built” and “the perfect operating system for personal and household use.” In September last year, the company had announced that Windows 10 was running on a whopping 900 million devices and is expected to edge closer to one-billion mark by 2020.

Theoretically, the only way to get a Windows 10 upgrade is to pay for it. Currently, the basic Windows 10 “Home” version starts at $139, which is downloadable directly from Microsoft’s website. Further, the Windows 10 “Pro” version meant for businesses and individuals with advance features costs $200. These are the prices are for one license per PC.

While Microsoft is encouraging its Windows 7 users to upgrade to Windows 10, it is also insisting those who have an older PC to buy a new desktop or laptop instead.

“PCs originally built with Windows 7 are running 10-year-old technology. Windows 10 has many of the same features and capabilities from Windows 7 built into the experience. Once you move to a new PC, there will be many aspects of the experience that you will find familiar, but also with important innovations and capabilities that were not available ten years ago,” adds Microsoft.

If you are not looking at any of the above two methods to upgrade to Windows 10, you can follow the method below to legally upgrade your OS for free.

How to Upgrade to Windows 10 for free:

If the device is not activated, you can manually enter your Windows 7 (or Windows 8) license key to activate it.

NOTE: Remember this method to get a free Windows 10 upgrade will work only if you were using a genuine license of Windows 7 (or Windows 8).