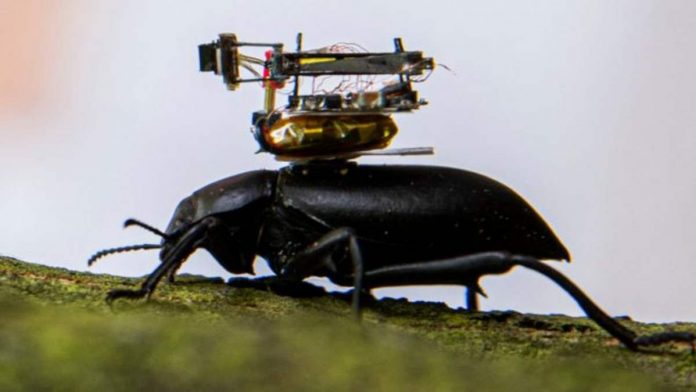 Scientists at the University of Washington (UW) in Seattle have developed a small, wireless camera that can be mounted on top of live beetles and insect-sized robots to stream live footage from a bug’s eye view.

The miniature camera described as ” GoPro for beetles ” weighs about 250 milligrams (approximately one-tenth of the weight of a playing card) and burns up a minimal amount of energy.

It streams video clips at the rate of one to five frames per second (1-5 FPS) of low-resolution, black and white footage to a nearby smartphone from a beetle’s back using Bluetooth from a distance of up to 120 meters. The footage sent to the smartphone is at a resolution of 160 by 120 pixels.

The camera sits on a mechanical arm that can pivot 60 degrees, which allows the viewer to capture a high-resolution, panoramic shot or track a moving object while burning up a minimal amount of energy.

“We have created a low-power, low-weight, wireless camera system that can capture a first-person view of what’s happening from an actual live insect or create vision for small robots,” said senior author Shyam Gollakota, a UW associate professor in the Paul G. Allen School of Computer Science & Engineering.

“Vision is so important for communication and for navigation, but it’s extremely challenging to do it at such a small scale. As a result, prior to our work, wireless vision has not been possible for small robots or insects.”

According to Gollakota, capturing footage while beetles move has a power-saving advantage over insect-like robots or drones.

“That mobility really drains the battery a lot,” he says. “By combining these two different things – living animals with sensors – you’re basically getting the best of both worlds.”

The camera is powered by a lithium-polymer battery that can run for over an hour when streamed continuously, says co-lead author Vikram Iyer, a UW doctoral student in electrical and computer engineering.

To conserve battery life, the researchers included an accelerometer in the camera to capture photos only when the insect is moving. By doing this, the camera could be operated for six hours on a full charge.

“We added a small accelerometer to our system to be able to detect when the beetle moves. Then it only captures images during that time,” said Iyer.

The researchers attached their removable backpack to two different species, the smooth death-feigning beetle (Asbolus laevis) and the pinacate beetle (Eleodes nigrina), which are known to be able to carry loads heavier than half a gram.

“We made sure the beetles could still move properly when they were carrying our system,” said co-lead author Ali Najafi, a UW doctoral student in electrical and computer engineering. “They were able to navigate freely across gravel, up a slope and even climb trees.”

The beetles also lived for at least a year after the experiment ended.

After researching with the insects, the team also used their camera system to develop “the world’s smallest terrestrial, power-autonomous robot with wireless vision,” demonstrated after the system used on the insects.

While the researchers are excited about the prospect for lightweight and low-power mobile cameras, they also acknowledged that there will be privacy issues because it has the potential of secret surveillance.

“As researchers we strongly believe that it’s really important to put things in the public domain so people are aware of the risks and so people can start coming up with solutions to address them,” Gollakota said.

The team published the results of the research in “Scientific Robotics” journal on July 15.