Popular Indian roaster and streamer on YouTube, Ajey Nagar, aka CarryMinati is the latest victim of the ongoing BitCoin hack scandal.

The hack happened on the second channel of CarryMinati, which goes by the name of CarryisLive, where he streams himself playing video games, often with other YouTubers and celebrities.

Just a week ago in a similar incident, Twitter accounts of several renowned celebrities were hacked to promote the Bitcoin scam.

YouTube has been at the receiving end of similar hacks for years now, with several YouTube channels getting hacked regularly to promote similar cryptocurrency scams.

The hackers live-streamed 3 videos, in which they asked for BitCoin & Ethereum donation with a changed description of the streaming videos, different from the usual ones we see on the channel. 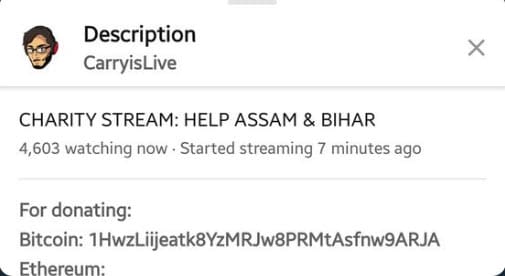 Coming to the crux of the matter, the first videos was titled “Ethereum Earning Call,” claiming to give away “free Bitcoin & Ethereum. 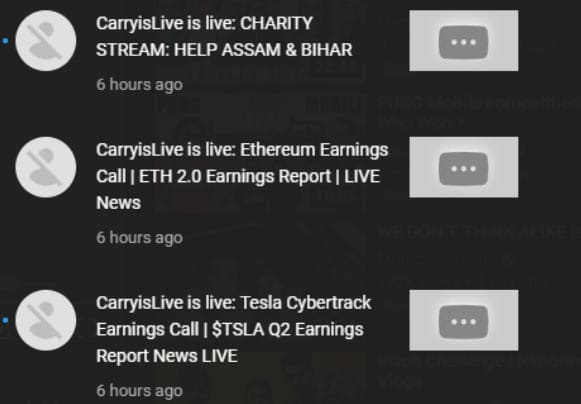 And the third video was titled “CHARITY STREAM: HELP ASSAM & BIHAR,” which is similar to a real stream done by CarryMinati a few days back, for the benefit of flood-affected people in the eastern states of India.

Thank you each one of you who supported this noble cause and helped in gathering INR 10,31,137 for Assam & Bihar on the charity stream today. I will be adding INR 1,00,000 to this amount. I am proud of you all ??

CarryMinati was quick to take cognizance of the matter and asked YouTube India on Twitter for assistance.

@YouTubeIndia My channel Carryislive has been hacked, need immediate assistance.

Social media, mainly Twitter is exploding with #carryminati hashtag, where fans are continuously posting about the hack, as more details are awaited on the topic.

#carryminati
#carryminati's 2nd YouTube channel got hacked today…
The Hacker asked for BitCoins, in the Donation named 'Help Assam and Bihar'…
Yalgaar : TikTok vs YouTube the end…
And now this one… @CarryMinati pic.twitter.com/EEGOegfP3f

Consequently, after the early morning drama, the scam videos streamed on Carryislive are not on the channel anymore, along with the display picture appearing as empty for now.

CarryMinati has announced about the recovery of his second YouTube channel while giving credit to YouTube India’s support. The 21-year-old Indian YouTube star says that he doesn’t have any idea about who was behind the hack.

My channel is now back with me! I don't know who did it & why but thanks to youtube for their immediate support.