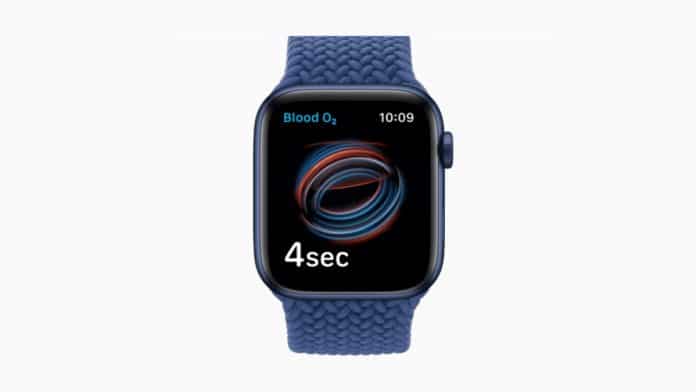 Apple announced its new Apple Watch Series 6 during its Special Event on September 15, 2020 with a revolutionary ‘Blood Oxygen’ feature. This new feature conveniently measures the oxygen saturation of the users’ blood, so they can better understand their overall fitness and wellness.

Oxygen saturation, or SpO2, represents the percentage of oxygen being carried by red blood cells from the lungs to the rest of the body and indicates how well this oxygenated blood is being delivered throughout the body. The majority of people have a blood oxygen level of 95 – 99%.

The Blood Oxygen app on Apple Watch 6 Series allows you to measure the oxygen level of your blood on-demand directly from your wrist. Further, the optical heart sensor has been redesigned in such a way to add blood oxygen measurement capabilities.

During a blood oxygen measurement, the back crystal shines red and green LEDs and infrared light onto your wrist. Photodiodes then measure the amount of light reflected back.

Advanced algorithms use this data to calculate the color of your blood. The color determines your blood oxygen level — bright red blood has more oxygen, while dark red blood has less.

While Apple’s pulse oximeter sensor in the Watch Series 6 does sound exciting, early reviewers of the device have something else to say.

According to Geoffrey A. Fowler, a journalist at Washington Post, who reviewed the smartwatch stated that the device’s oximeter is “mostly useless” because it gave inconsistent readings. He also tried another fitness tracker, Fitbit Sense but it too provided incorrect blood-oxygen readings.

“Sometimes the new Apple Watch Series 6 reports my lungs and heart are the picture of health, pumping blood that’s 100 percent saturated with oxygen. At other times, it reports my blood oxygen is so low I might be suffering from emphysema. (I am not.). Over several days of comparing my second Apple Watch’s measurements to my FDA-approved finger oximeter, Apple’s readings most often differ by two or three percentage points — though they’ve also sometimes exactly matched, and sometimes been as much as seven percentage points lower,” Fowler told about the Apple Watch.

Fowler also points out some of the problem could be related to the stretchy band called Solo Loop that is available in a variety of sizes. On trying one-size smaller, some of those “unsuccessful measurement” errors were removed, but not all of them. Also, it left a slight imprint on Fowler’s wrist.

What Could Be The Problem?

One of the major reason for the error-rate is the placement of the device on the wrist vis-à-vis a pulse oximeter to measure blood-oxygen levels.

However, in the case of Apple Watch, the user is required to keep his arm steady for 15 seconds with the wrist lying flat and the Apple Watch facing up for results.

While the FDA-approved pulse oximeter reported an error rate of plus or minus 2% points, which matched with Apple Watch Series 6 sometimes. However, most of the times, the Apple Watch showed a deviation between 3% and 7% from the finger pulse oximeter.

Apple Watch Is Not a Medical Device

Defending its Apple Watch Series 6, the company notes on its website that the “Blood Oxygen app measurements are not intended for medical use, including self-diagnosis or consultation with a doctor, and are only designed for general fitness and wellness purposes.”

While the blood oxygen sensor feature in the Apple Watch Series 6 is definitely a plus, but it cannot be depended upon for accurate oxygen level measurements or lung health monitoring.

Nonetheless, this is Apple’s first try and it is still working on improving the feature. The company is also collaborating with researchers to conduct three health studies that include using Apple Watch to explore how blood oxygen levels can be used in future health applications.

This year, Apple will be joining forces with the University of California, Irvine, and Anthem to examine how longitudinal measurements of blood oxygen and other physiological signals can help manage and control asthma.