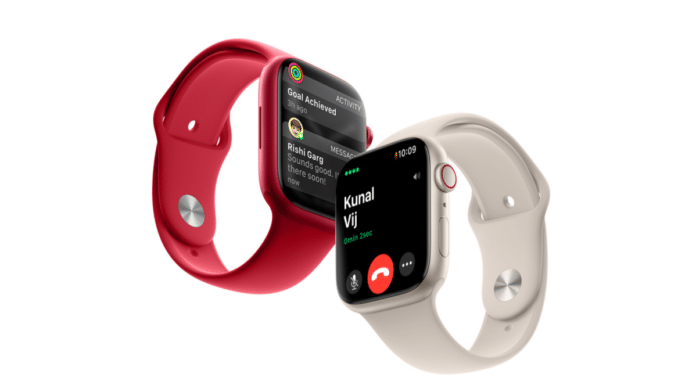 Apple has launched a completely revamped Apple Watch Series 7 alongside the new iPhones and iPads on the September 14th Event.

It is the first major redesign to the smartwatch line-up and brings some exciting new features and upgrades.

Here is everything you need to know about the upcoming Apple Watch Series 7.

What’s in store for the Apple Watch Series 7?

The Apple Watch Series 7 features an all-new redesigned Always on Retina Display with rounded edges and thinner bezels that provides up to 20% more screen real estate than the Apple Watch 6. The new smartwatch is available in two sizes – 41mm and 45mm.

The display itself is 70% brighter and features a redesigned upgraded crystal that is 50% thicker and hence better at crack resistance than the previous generation smartwatch.

It is also certified IP6X for dust resistance and WR50 for water resistance.

Powered by WatchOS 8, the user interface of the Apple Watch 7 has been optimised for better usability on a larger screen.

Two larger font sizes are available, the buttons and menu tiles are now larger in apps like Stopwatch, Alarms, and Activity, making it easier to interact with the screen.

It utilises on-device machine learning to detect the next word based on context, making it easier to reply to messages and emails.

The WatchOS 8 also brings ‘automatic fall detection’ that detects the motion and impact when you fall off the bike.

Unfortunately, the new smartwatch does not add any new health tracking sensors, like the rumoured blood pressure and glucose sensors.

However, it retains all the essential health and fitness trackers including an electrical heart sensor and ECG app, SpO2 sensor, the U1 Ultra-Wide Band chip, a native sleep tracking feature, and several other features using the advanced motion sensors.

The Apple Watch 7 comes with an 18-hour battery life on a single charge through a Magnetic Fast Charger USB-C Cable and an upgraded charging architecture, which provides 33% faster charging compared to the Apple Watch 6.

That’s everything we know about the Apple Watch 7 at this point. Considering all features, the smartwatch line has received a significant upgrade. However, a successor to the budget Watch SE was not announced at the event.