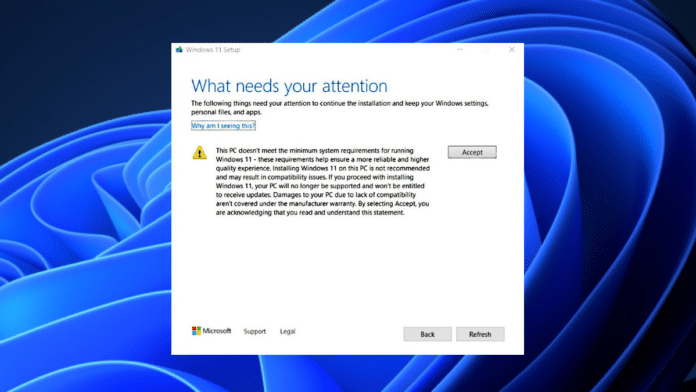 Microsoft is set to officially release its next operating system, Windows 11 to the general public on October 5th.

In order to install and upgrade to Windows 11, your PC needs to meet minimum requirements as officially shared by Microsoft.

On the other hand, in the case of unsupported CPUs, users can upgrade to Windows 11 by installing ISOs but with the risk of being left in an unsupported state.

Now, a recent report by The Verge, says that a new installer message is popping up for users trying to install Windows 11 on an unsupported device during the setup process.

It warns the users once Windows 11 is installed on such systems, it will not only no longer be eligible to receive updates but also could end up voiding their warranty.

It also notifies users that any damages occurring due to compatibility issues won’t be covered under the device’s manufacturer warranty.

“This PC doesn’t meet the minimum system requirements for running Windows 11 – these requirements help ensure a more reliable and higher quality experience.  Installing Windows 11 on this PC is not recommended and may result in compatibility issues. If you proceed with installing Windows 11, your PC will no longer be supported and won’t be entitled to receive updates. Damages to your PC due to lack of compatibility aren’t covered under the manufacturer warranty. By selecting Accept, you are acknowledging that you read and understand this statement,” the waiver says.

If any more news regarding this reported waiver appears again, we will update our article accordingly. Meanwhile, you can use the recently released updated PC Health Check app to check whether your system meets the requirements or not.