If you are wondering How To Download Windows 11 On Android Phone? this article is just for you!

Despite a rocky start, Windows 11 is now being adopted at a rapid pace. The computer OS developed by Microsoft can run on thousands of different hardware configurations ranging from server computers to ultrathin tablets.

Thanks to the powerful hardware of modern-day Android smartphones, it’s now possible to run desktop Operating Systems like Ubuntu, Windows 7, Windows 10, and many more.

So here’s everything you need to know about How to run Windows 11 On Android Smartphones.

You can install and run the full-fledged version of Windows 11 on an Android smartphone. Let me get into the details now.

One of the most noteworthy features of the Android 13 operating system is a standardized system for virtualization. This feature was unveiled during the Android 13 Dev Preview launch.

With the help of virtualization, you can run an OS within another OS. As a result, virtualization on Android 13 will help you effortlessly run Windows 11 on an Android smartphone or tablet.

Android web and app developer Danny Lin has managed to get Windows 11 Arm running in a virtual machine on his Pixel 6 smartphone.

Danny also managed to launch and play the game Doom on the Windows 11 virtual machine present on his Google Pixel 6.

So with Android 13 or higher, you can create a virtual machine on your smartphone and boot a Windows 11 ISO file.

Project Renegade is a windows 11 emulator for android phones. It is still under development but has seen lots of success recently. You can even play windows games on android using this emulator.

Project Renegade is currently supported by limited flagship phones of Oppo, Vivo, Xiaomi, and a few others.

There are a few other windows PC emulators for android as well that have seen small success to emulate windows 11 on android phones.

However, do note that you need a flagship smartphone to fulfill the specs, features, and computer requirements for Windows 11.

The above-mentioned requirements are important for running Windows 11 natively.

That said for running the Windows 11 virtual machine just ensure that the Processor and RAM requirements are fulfilled.

If you read the previous section carefully then you might have understood that in the future it will be possible to run Windows 11 on Android smartphones easily.

That said, you can still enjoy the Windows 11 experience on your existing smartphone using Computer Launcher 2. As the name suggests, this launcher replicates Windows OS and makes your smartphone look like a desktop computer. 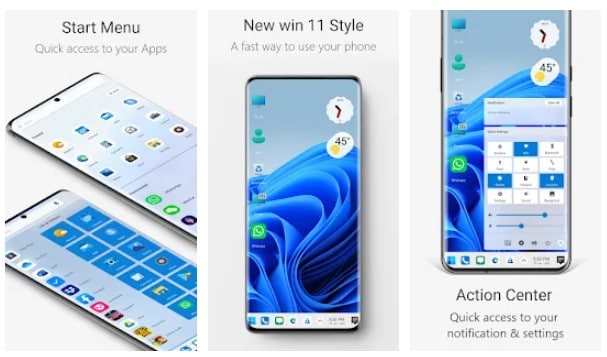 So this was a detailed guide on how to install Windows 11 on Android smartphones.

If you have any doubts or recommendations then feel free to message us on our social media platforms.