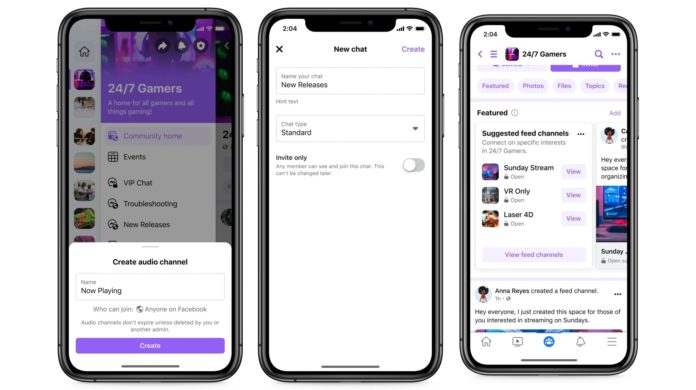 Meta-owned Facebook on Tuesday announced that it is testing out some new features for Facebook Groups, including Channels.

As per the announcement, Facebook group admins will now be able to create channels in the groups that are focused spaces for people to connect in smaller, more casual settings within their communities where they can have deeper discussions on common interests or organize their communities around topics in different formats.

The Community Chat Channels feature is a platform where people can message, collaborate and form deeper relationships around topics in a more real-time way across both Facebook Groups and Messenger.

“So when you’re in your new BBQ lovers group and need real-time feedback while attempting your first brisket, an admin can create a chat for that,” Facebook wrote in a blog post.

Another feature is Community Audio Channels, which will allow admins and members to casually jump in and out of audio conversations in real-time in the groups that they are already a part of, a feature very similar to the Discord voice chats.

Lastly, the Community feed channels are a way for community members to connect when it’s most convenient for them. Facebook says admins can organize their communities around topics within the group for members to connect around more specific interests.

“For example, if you’re in a BBQ lovers group, there could be a feed channel where you can post and comment on the topic of smokers,” the company added.

Facebook also announced that it is testing a new sidebar that will allow its users to quickly find their favorite Facebook Groups on the platform. Other than showing the groups that users follow, the sidebar will also show the latest activity within them, such as new posts or new chats that are unseen in the group. In addition, the users will be able to pin their favorite groups so they show up first, discover new groups, or even create their own.

The social media giant is also improving how each group is organized via a new menu within the group, which will include things like events, shops, and a variety of channels to make it easier for users to connect with others around the topics they like.

Currently, all the new features of Facebook Groups are in the testing phase, which we can expect to roll out to all users in the coming months.